The reconditioned East Coast is a new attraction in Split 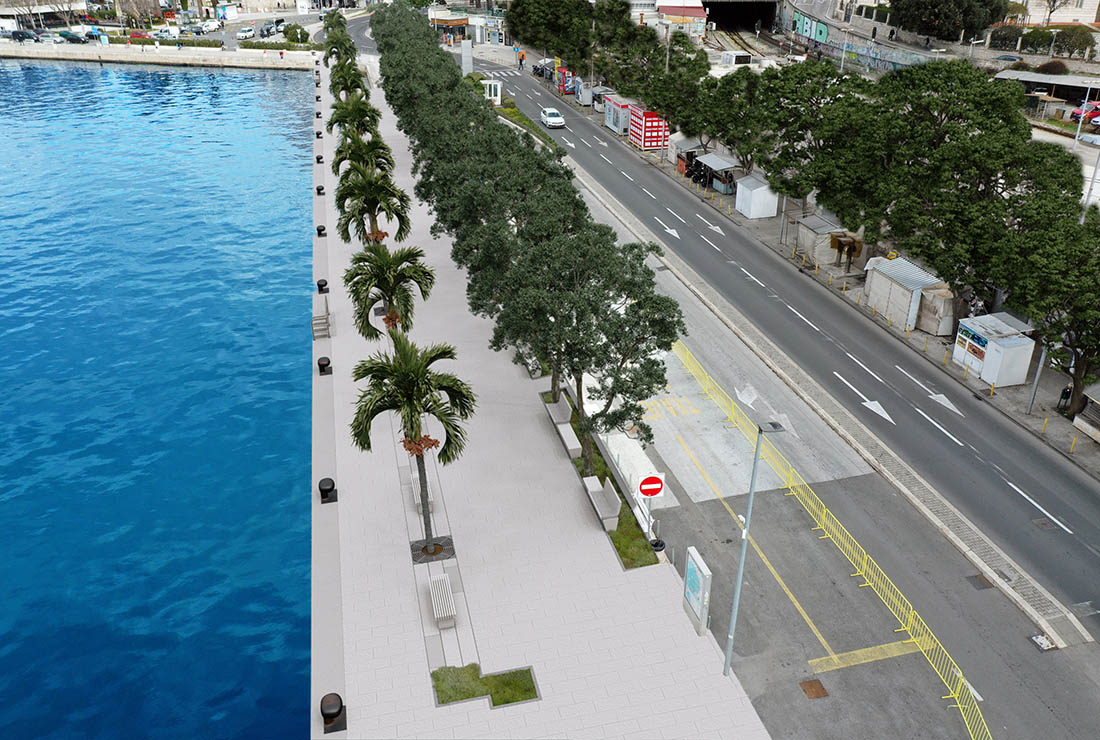 The reconstructed Quay of Knez Domagoj in the City Port of Split, between the Harbour Master's Office and the Central Bus Station will be opened in a short while. The construction works to expand and remodel the waterfront lasted one year, since February 2021.

The East Coast in the City Port was created 150 years ago, by depositing excess material from railroad excavations. It stretches over 260 metres, from Obala Lazareta to the pier of St. Domnius, and had not been renovated since its construction. It was not considered noteworthy before the latest reconstruction, owing to its shabby appearance and clutter created by numerous stalls, kiosks and coffeehouse terraces.

A sense that things might change for the better was generated by the publication of the Master plan study for East Coast and Kopilica zones in June 2020, describing the Quay of Knez Domagoj as the new entrance to Split. The study planned an expansion of the waterfront to raise passenger capacity and increase the operating area, as part of the revitalization of the port zone.

The contract awarding a grant of €5.64 million for the implementation of the project, concluded in December 2020 between the Port Authority Split, Ministry of the Sea, Transport and Infrastructure, and the Central Finance and Contracting Agency, enabled the financing of the reconstruction using the Cohesion Fund and the state budget.

The upgrade lasting one year expanded the width of the coast from four to nine-and-a-half metres, throughout its length. This created adequate embarkation space, separated from the new promenade in signature Mediterranean style, which is drawing new admirers daily. Four new catamaran docks were built, outfitted with new utility equipment, lighting, and dockside power and fresh water hookups.

Palms, benches and a stonework promenade

Fast ship lines and regular lines for Brač, Šolta, Hvar, Vis, Lastovo and Korčula launch from the Quay of Knez Domagoj. Thanks to the reconstruction and upgrade project, the experience of travel to Split is significantly more comfortable for the residents of Dalmatian islands, flocking to the ‘center of the world‘ to use educational, medical, cultural, sporting and other amenities.

Berthing space is reserved for ships, and uninterrupted passenger and cargo embarkation is performed using gangways lowered to the shore. By separating the vehicle embarkation zone from the promenade, the knot which made port access difficult was untangled. The green belt, that will provide life-saving shade in the summer, is dominated by blooming magnolias in these spring days.

The project “Reconstruction – upgrade of Quay of Knez Domagoj I and II in City port basin Split”, initiated with the motto of giving Split the coast it deserves, will be completed upon the issuance of the operating permit and the fast-approaching opening of the coast to marine traffic. The satisfaction of being the first to experience the coast in a new, more luxurious edition, fell to the runners on the 22nd annual Split marathon, and from now on it can be shared by everyone.

The new East Coast is the latest result of the investment cycle in ports, breakwaters and waterfronts on the islands and the coast, managed by the Ministry of the Sea, Transport and Infrastructure. The total investment so far has reached €175 million, most of it financed from the Cohesion Fund.