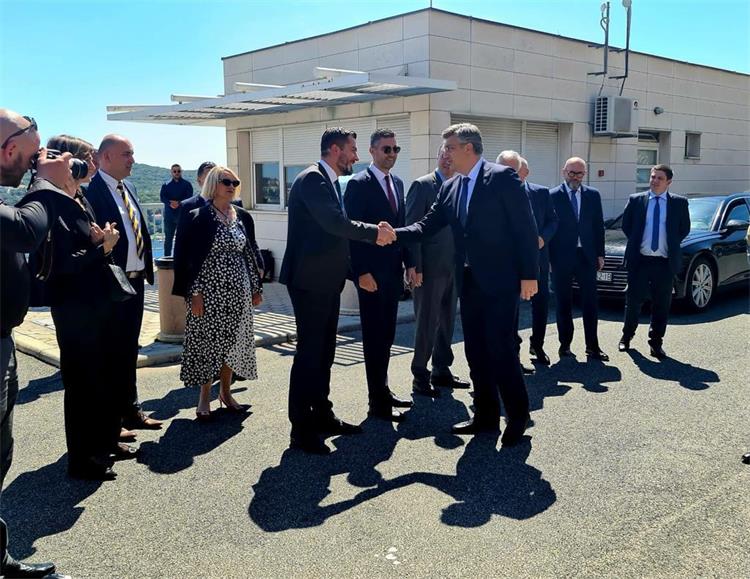 In the background of the 20th anniversary of the opening of the Dr. Franjo Tuđman Bridge in Dubrovnik and the commemorative session of the County Assembly on Dubrovnik-Neretva County Day, on Wednesday, May 11 in the Great Hall of Dubrovnik a contract was signed for the new Port of Korčula - port of Polačište.

Conclusion of the €18.2 million contract, between the director of the County Port Authority Korčula Ante Tvrdeić and Zdenko Dvornik, representative of the contractor Aqua Mont Service Ltd. Croatia and Aqua Mont Service Ltd. Serbia, ended the tangled procurement process, whose pending annulment was overturned by a February decision from the State Commission for the Supervision of Public Procurement Procedures.

All lines will converge in Polačište

The goal of the largest public investment in the recent history of the island of Korčula is the construction of port infrastructure at Polačište, in the immediate vicinity of Žrnovska Banja, 4 km west of the town of Korčula. The port at Polačište is envisioned as a port open to public traffic, intended to accommodate ferries, catamaran, ships, cruisers, supply vessels and various tourist craft.

After the opening, the lines for which the ports of Dominče and Korčula have become too crowded will be moved to the new state-of-the-art port. Namely, lines 634, 9608 and 9807, and four seasonal lines without public service obligation, which are going to be moved to the new location in Polačište, transported 1.346.502 passengers and 263,649 vehicles in 2018, before travel restrictions were introduced. This level of passenger load causes traffic congestion and crowding in the center of Korčula.

The construction works in the eastern section of Port Polačište include the construction of 125 m of dock with a ferry slip and a 55 m pier with two ferry ramps. In the western section of the port a new 218 m dock will be constructed, capable of accommodating multiple smaller ships or a single ship over 200 m in length, and a 50 m custom house pier. The project also envisions the construction of a maritime-passenger terminal building, passenger and vehicle embarkation platforms and creating a turnaround for buses used to transfer passengers to the Korčula town centre.

The construction works are expected to take two and a half years.

The €18.2 million works expenditure is the biggest item for the project “New port of Korčula – port of Polačište” worth €25.3 million. The project is supported by a €24.3 million grant from the Operational Programme Competitiveness and Cohesion 2014 – 2020. The remaining €1 million is provided by the County Port Authority and Dubrovnik-Neretva County.