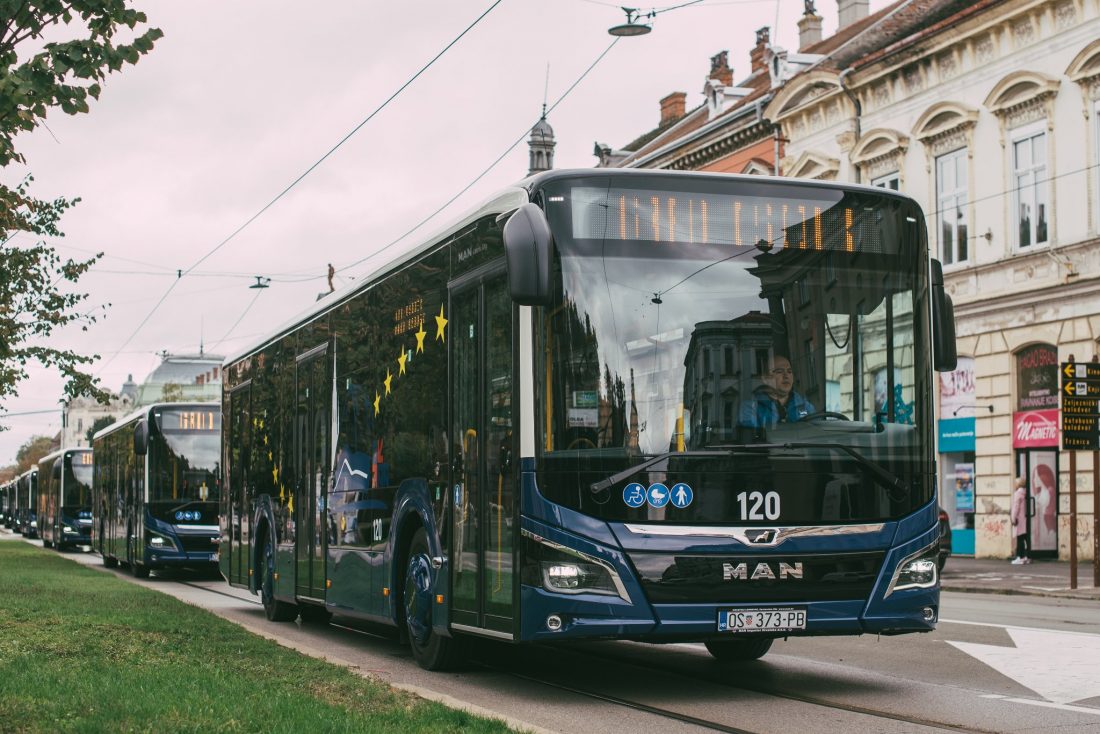 The project goal is increasing the comfort and availability of public transport services, increasing personal safety in public transport, reducing vehicle maintenance costs and negative environmental impact through lower greenhouse gas emissions. Following the initial seven, an additional six low-floor buses will be delivered this autumn, which have already been ordered at a price of €1.98 million. The total project value is €4.31 million, and €2.84 million or 82% of the value was financed by EU grants.

Highlights of the conference were the handover ceremony and test drive. The events on the Ante Starčević square in Osijek were attended by the Deputy Prime Minister and Minister of the Sea, Transport and Infrastructure Oleg Butković, mayor Ivan Radić, Osijek-Baranja County prefect Ivan Anušić and Chairman of the Management Board of Hrvatske ceste Ltd. Josip Škorić. Deputy Prime Minister Butković pointed out that the procurement of new buses is part of a large programme financed by the European union through the Ministry, explaining that so far in Croatia, for nine cities, around 70 million euros have been allocated for this purpose. The amount was used to procure 412 new buses for transport service operators.

“It is a big investment cycle for the improvement of urban public transport, and the financing of such projects opened up the possibility of Osijek really becoming a metropolis, because any city that does not have a well-developed and renovated transport infrastructure does not provide a great life for its citizens,” said the Deputy Prime Minister. Referring to the previous project for the procurement of 12 vehicles from 2019, he added that City Passenger Transport will receive a total of 25 new buses, and now seven of the new group of 13 buses have been delivered.

The fleet of City Passenger Transport, which currently numbers 32 buses, will be almost entirely renewed through the implementation of this project. The newest traveling symbols of the city on the Drava will soon start operating on the lines covered by Public Service Obligation.