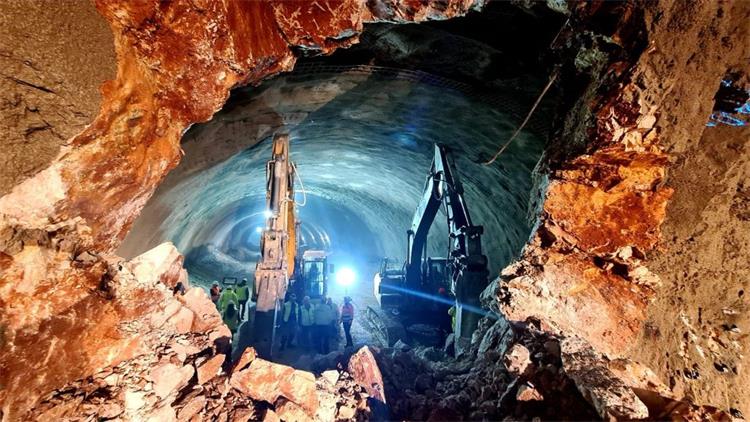 Boring through the last stretch was attended by the Minister of the Sea, Transport and Infrastrukture Oleg Butković and president of the management board of the company Hrvatske Ceste Josip Škorić.

The breakthrough is the first phase of tunnel construction, in which the material is excavated from the upper third of the passage. The full diameter is realized by excavating the lower portion. Excavation is followed by the installation of utility ducts and lining the surface with concrete.

Minister Oleg Butković, who monitored the breakthrough along with representatives of the beneficiary and the contractors, voiced his gratitude on the efficacy of the construction works. “In addition to this project, we are currently implementing large infrastructure projects in Croatia, from the Peljesac Bridge, construction on the Vc corridor, ports, harbors, large railway projects. This is one of the large projects that is important for the development of the Port of Rijeka, Zagreb Pier, which has successfully selected its concessionaire, and in that sense I thank the Port Authority, and especially the Government and Prime Minister, who provided tremendous support for the project.“

An express road for freight transport

State road D403 is the future link between the Zagreb Pier container terminal and the Rijeka bypass, and the Rijeka – Zagreb highway. The construction of the challenging 3-kilometre highway section, scheduled to be open for traffic in mid-2023, is required before an operating permit can be issued for the terminal. On its northern end, D403 will connect to the bypass through a roundabout on the Škurinje interchange. A spur route will connect the new road to Zvonimirova Street and the Rijeka urban street network.

Construction of the roundabout on the Škurinje interchange is ongoing. The retaining walls have been completed, and significant progress has been made on electrical and water supply, and drainage. On the southern end of D403, toward the container terminal, the Mlaka viaduct and Pioppi underpass are under construction. The supporting columns for the Pioppi railroad underpass are in place, and the load-bearing structure is being assembled.

The success of building the D403 state road from Škurinje interchange to Port of Rijeka is vital for the secure operation of the port terminal, and to make the most of the €58,9 million Cohesion Fund contribution. The Grant Contract, concluded as part of the Operational Programme Competitiveness and Cohesion 2014 – 2020, is used to fund most of the €86,2 million project cost.