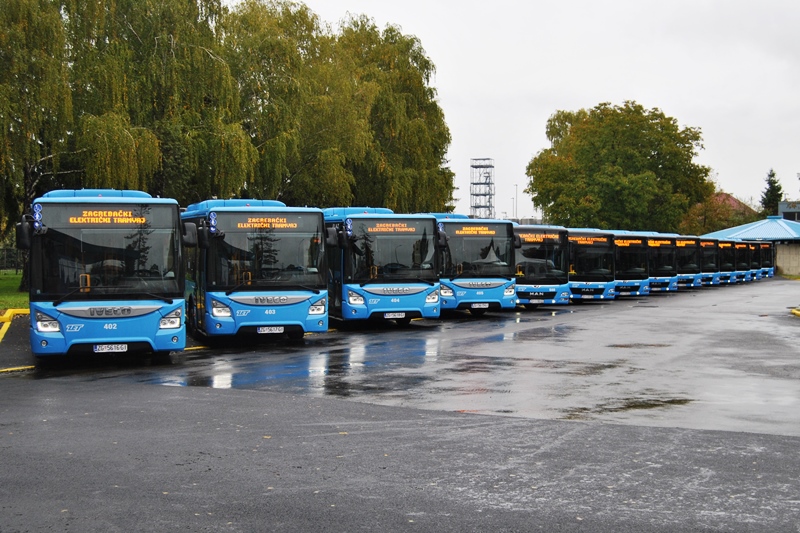 The Zagreb city transport company ZET renewed its bus fleet on three occasions with EU funds from the Operational Programme Competitiveness and Cohesion 2014 - 2020 (abbrev. OPCC). The first contract signed in October 2017 resulted in the purchase of 15 buses meeting the diesel EURO 6 emissions standard. The second contract, which financed the purchase of 29 buses, was concluded in January 2019. Funding for the last in a series of projects in OPCC was contracted in June 2021, and will ultimately result in the purchase of 65 new and the replacement of an equal number of old buses that will be scrapped. For the realization of the project worth €24 million, co-financing of €16.4 million from the Cohesion Fund was made possible.

The vehicles started arriving at their Zagreb address on October 24, when Zagreb Electric Tram Ltd. (ZET) took ownership of 20 MAN low-floor buses. The keys to another 25 IVECO semi-low-floor buses were handed to ZET on November 8. Those 45 buses, assembled at the ZET bus depot in Podsused, were presented to the public today. Deputy Prime Minister and Minister of the Sea, Transport and Infrastructure Oleg Butković, Zagreb Mayor Tomislav Tomašević, Director of ZET Marko Bogdanović and Director of the Central Finance and Contracting Agency (CFCA) Dragan Jelić participated in the presentation.

The new vehicle fleet is an important factor in the plans to improve public transport in the Zagreb area, which were described by Minister Oleg Butković. “Our task is helping these and similar projects to make traffic and public city transport better and more functional and to keep pace with other European metropolises. In Zagreb, the ministry financed the roundabout, renovated the tram infrastructure, and by the end of the year we will sign a contract for 20 new low-floor trams,” said Butković.

Completing the renewal of the diesel bus fleet

Mayor Tomašević sees the project as a step towards more efficient and safer public transport in Zagreb, but also a prelude to a zero-emissions public transport. “We will also have some savings here, saving several million on fuel alone, and you have seen the prices go up. In that sense, these buses are more economical, this is the completion of the diesel fleet renewal, and in cooperation with the ministry, we will work on getting Zagreb a fleet powered by alternative fuels“, the mayor announced.

“Although these buses are the most modern to date and meet the highest environmental standards, the completion of the delivery will represent a new beginning, as these should be the last diesel-powered buses in ZET” – confirmed the head of ZET, Bogdanović.

Delivery of the last twenty “blues” from the quota of the project Procurement of 65 buses for ZET d.o.o. is expected within a few weeks. This will be the final instalment in the procurement of 109 buses, within three projects financed through the Operational Programme Competitiveness and Cohesion. The figure corresponds to approximately 30 percent of the total needs of city transport in Zagreb. With the new buses, the availability and public satisfaction with the transport service increases. At the same time, the harmful impact on the environment and the number of accidents decrease, and savings are made on vehicle maintenance.