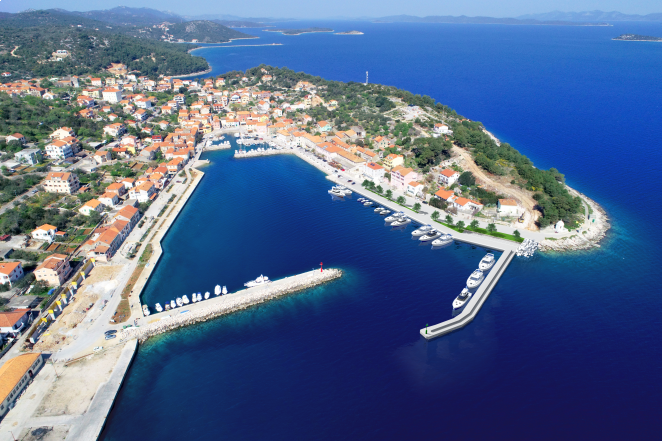 The Contract of 29 July between County Port Authority Zadar, the Ministry of the Sea, Transport and Infrastructure, and the CFCA resolved any financing dilemmas for the project "Upgrading the town port of Sali on Dugi otok". In early October, construction work on the project began.

Two months after €10.2 million from the Cohesion Fund and €1.8 million from the State budget were secured for the project through a Grant Contract, the workers hired by the contractor Adriaing Ltd. and Kali gradnja are hard at work. Upgrading the port of Sali on Dugi Otok is a task they are expected to complete in two years.

By the end of 2023, approximately 150 meters of shoreline southeast of the Customs berth will be expanded and outfitted. The expansion of the waterfront is needed to separate motorised and pedestrian traffic in the port of Sali, and secure more parking space on the car park which has become too restricted for the burgeoning circulation. A 116-meter breakwater will then be constructed at the far end of the new structure. The breakwater will shield the new quay from wind and waves from the south-eastern and southern quarter. The outer bank of the breakwater will also be used for temporary mooring.

Sali is the principal port on Dugi Otok. State lines annually transport 140.000 passengers between Zadar and Sali, which is a heavy load for island conditions. Among the passengers are the visitors to the Nature Park in the bay of Telašćica and the neighbouring Kornati islands.

Once the planned upgrade is completed, the port of Sali will meet safety conditions to receive vessels in bad weather. This will mean fewer cancelled trips and delays, which translates into more satisfied passengers. The mooring capacity will be greatly increased relative to the 70 slips currently available, and so will the mooring quality. If all goes to plan, the residents of Sali, their guests and operators will agree that the two years’ wait was worth it.