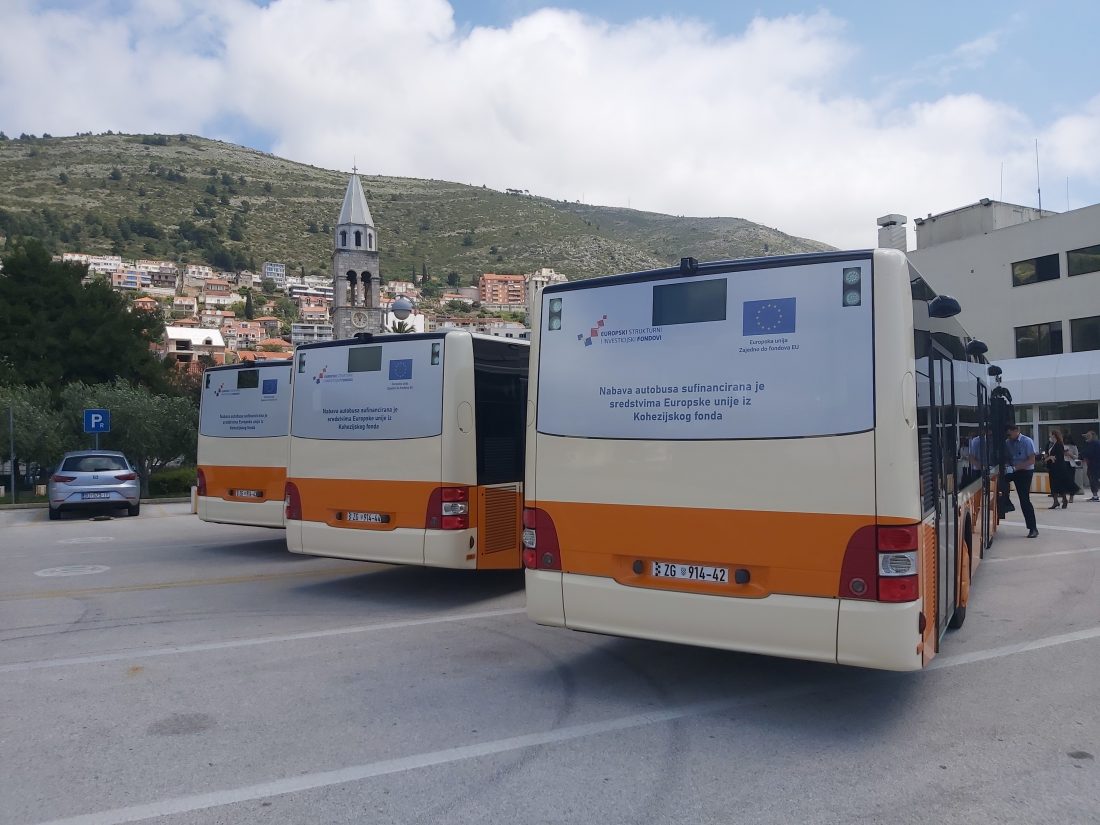 A grant agreement was signed for the purchase of 18 new buses worth €5.6 million. They will replace the obsolete part of the fleet for the Dubrovnik service operator Libertas.

The public transport company Libertas Dubrovnik, like most urban bus operators in Croatia, is faced with the obsolescence of a part of their fleet and high mileage for some of the buses. Hence the Ministry of the Sea, Transport and Infrastructure initiated an important fleet renewal project targeting urban bus operators, which has been used to procure over 200 new buses in nine cities throughout Croatia up to this point.

The project to procure buses for the transport company Libertas – Dubrovnik is carried out in cooperation with the Ministry and the City of Dubrovnik, an arrangement which has resulted in the acquisition of 11 new buses worth €2.4 million in a prior call, vehicles which are currently being delivered.

The 18 new buses procured via the Ministry’s second call are worth €5.6 million in total. In addition to increasing the quality of public transport in Dubrovnik, the new buses will also pollute less. This refers to the fact all new buses will comply with the Euro VI emissions standard, and will be used to replace the obsolete part of the vehicle fleet, which is currently producing significant amounts of pollution. The Libertas fleet providing transport services in the area of the City of Dubrovnik and parts of the Dubrovnik-Neretva County numbers 115 vehicles, and features a large number of buses running on Euro 2 and Euro 3 standard engines, which is harmful to the environment. It is interesting to note that if 18 current buses were kept in operation, they would produce approximately 149,25 tonnes of harmful gases and solid particles over their service life. The analysis to measure the scope of reduction in negative environmental impact shows a reduction as high as 121,37 tonnes of harmful gas and solid particle emissions. Thus, with this procurement, the Dubrovnik public vehicle fleet will be renewed by a total of 28 buses, positively impacting gas emissions and environmental pollution and ultimately contributing to raising and improving public transport quality in Dubrovnik and its surroundings.

This project, like the previous bus procurement, was mostly funded using EU grants, allowing the beneficiary to finance up to 85% of eligible costs using Cohesion Fund contributions, which translates to €3.8 million of eligible project costs.

The Grant Agreement was signed by the Minister of the Sea, Transport and Infrastructure Oleg Butković, Director of the Central Finance and Contracting Agency Tomislav Petric and Director of Libertas – Dubrovnik d.o.o. Ante Vojvodić.

Minister Oleg Butković reflected on the Ministry’s priorities: “I am extremely glad that we are continuing with the project of purchasing new buses throughout Croatia, including in the City of Dubrovnik. It is important to emphasize that through this project we have so far procured more than 200 new buses, which has significantly improved the quality of public transport for as many as 1.6 million Croatian citizens living in urban areas that have had their fleets renewed through this project. For Dubrovnik, this project is very important not only in terms of increasing the quality of public transport but also for preserving the environment, an important aspect of this project. It should be noted that in addition to this project, we are implementing a number of infrastructure projects financed using EU funds in Dubrovnik, from the modernization and development of Dubrovnik Airport, the project of reconstructing and expanding the Lapad coast, to a number of investments in port infrastructure.”

Dubrovnik Mayor Mato Franković also commented on the latest in the series of projects in the Dubrovnik area: “After initially acquiring 11 new public transport buses using EU and national grants, we are especially pleased that the fleet of city public transport operator Libertas will be further renewed with the purchase of an additional 18 buses, also funded by grants. Furthermore, it is important to emphasize that the vehicle fleet modernization, increased efficiency and reduced maintenance and operating costs will take us to the ultimate goal – free urban transportation for the citizens of Dubrovnik that discourages the use of cars in the urban zone and promotes greater mobility. Ultimately, we believe that in the next four years we will see the first electric buses for city transport, also financed by EU funds, operated by Libertas. I would especially like to thank Minister Oleg Butković and State Secretary Josip Bilaver for taking note of our efforts and supporting projects important for Dubrovnik, not only in public transport, but also infrastructure projects such as the Lapad Coast and the Tamarić project, which is vital for residents of Mokošica and will ensure that the Mokošica Elementary School is finally connected by public transport.”