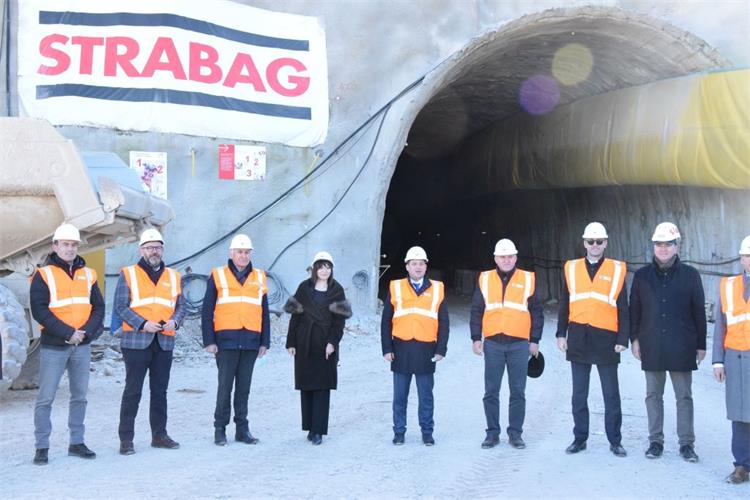 Minister of Regional Development Nataša Tramišak and Minister of Transport Oleg Butković toured the construction works on the access roads to the Pelješac bridge. The contractors assure that the Pelješac Bridge and access roads will be ready in time for the 2022 tourist season.

On Friday, Ston played host to top government executives. Leaders of county and local self-government bodies from the extreme south of Croatia – prefect of Dubrovnik-Neretva County Nikola Dobroslavić, Mayor of the City of Dubrovnik Mato Franković and the mayors of Konavle, Ston, Orebić and Janjina greeted the Minister of Regional Development and EU Funds Nataša Tramišak and the Minister of the Sea, Transport and Infrastructure Olega Butkovića, as well as the President of the Management Board of Hrvatske ceste Josipa Škorića and other guests.

The programme started with the signing ceremony for contracts and agreements for the reconstruction and modernization of ports in the Dubrovnik-Neretva County, and continued with a tour of construction works on the access roads to the Peljesac Bridge. The works are taking place near the Debeli brijeg tunnel, where the hole-through was recently achieved, adjacent to Ston.

The visit was preceded by a coordination meeting at which Minister Tramišak and Minister Butković were made aware of the current rate of progress, accompanied by Hrvatske ceste CEO Josip Škorić. They had the opportunity to hear about the progress directly from the contractor, supervising engineers and project manager for the Pelješac Bridge and access roads.

“Today we had a coordination meeting with representatives of all contractors and site supervisors on all stages of construction of the Pelješac Bridge. This project is nearing completion, both the bridge and the roads. There are no major problems and delays and by the 2022 season we will have the Pelješac Bridge finished, and very soon after the access roads too, that are an integral part of the project. It is the largest and most significant infrastructure project in the Republic of Croatia. We are touring the second phase of the project, the road being constructed by Strabag. As you know, the Debeli Brijeg tunnel was broken through 74 days before the scheduled deadline.” – Minister Butković stated.

Initially, there were fears that the construction of access roads to the Peljesac Bridge could turn into the Achilles’ heel of the entire project of connection with southern Dalmatia due to the complexity of the works and the uncertainty of public procurement procedures. However, the last quarter was marked by a resurgence from the contractors, both the Austrian Strabag and the Greek AVAX, in charge of building the Ston bypass. This allowed works to intensify and improved the coordination of project activities, thus eliminating part of the vulnerability. Breaking through the Debeli Brijeg tunnel, one of the most demanding objects on the route, heralded a calmer entry into 2021.