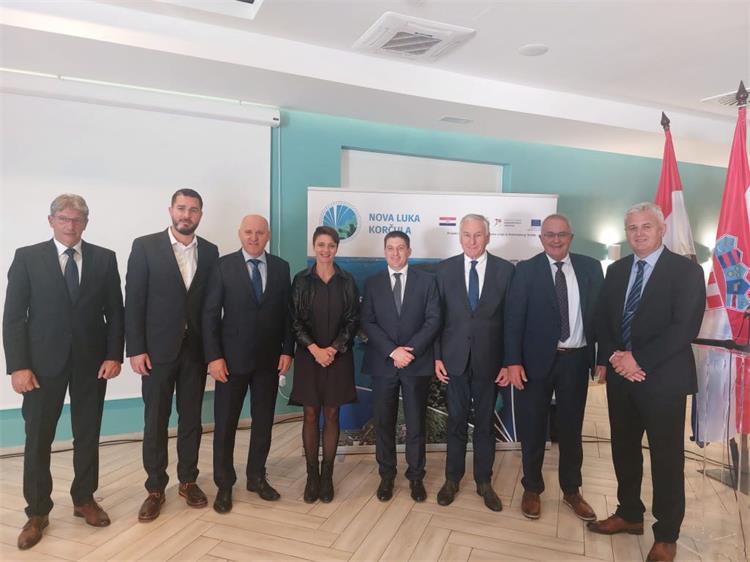 The starting conference for the project of the new port of Korčula - the port of Polačište, organized by the County Port Authority Korčula on Thursday, November 10, gathered more than sixty participants. The large public and media event was attended by Vice President of the Government and Minister Oleg Butković, Prefect of Dubrovnik-Neretva County Nikola Dobroslavić and Deputy Joško Cebalo, Member of Parliament Branko Bačić, Mayor of Korčula Nika Silić-Maroević, Director of the Port Authority of Korčula Ante Tvrdeić and other dignitaries.

The organizers took advantage of the spotlight to highlight the largest project anyone on Korčula can remember – the construction of a new port at Žrnovska Banja, to replace the existing port in the town of Korčula proper, as the main port for public transport on the island. Burdened by congestion and little room for expansion, the port in Korčula can no longer satisfy the needs of its numerous users. The more modern Polačište is also destined to take over ferry traffic from the port of Dominče, a port coping with intense motor vehicle traffic arriving from the mainland.

Once completed, the new port Polačište will welcome ships on either of its twin 55-metre piers, each equipped with two ferry slips. Docking space for the largest 130-metre ferries will be provided along the eastern shoreline, while the western shoreline will boast an even greater capacity, able to receive vessels of over 200 metres in length.

Walking across the gravel of Polačište cove on their way from the conference, however, the participants touring the site were left to imagine a port there. Having just secured and cleared the construction site, and built causeways so equipment could be brought to the site, the contractor Aqua mont service Ltd is still left with all of the building work ahead of them.

The time for major infrastructure projects in the south of Croatia did not end with the construction of Pelješac Bridge. For the residents on the island of Korčula, the projects of greatest relevance are the new €25 million port of Polačište in the east of the island and the new €14.8 million maritime passenger terminal Vela Luka in the west.

MP Branko Bačić emphasized these two projects, and some others, in his address. “With the completion of this major project in Korčula, followed by the maritime passenger terminal in Vela Luka, as well as the port of Perna with the Orebić bypass and the cross-Pelješac expressway, we will have a complete investment cycle contributing to Korčula and its connectivity, and the connectivity of our county.” – Bačić said.

The projects in Žrnovska Banja and Vela Luka are receiving €36.3 million in support from the Operational Programme Competitiveness and Cohesion 2014 – 2020. The support was awarded by the Ministry of the Sea, Transport and Infrastructure.