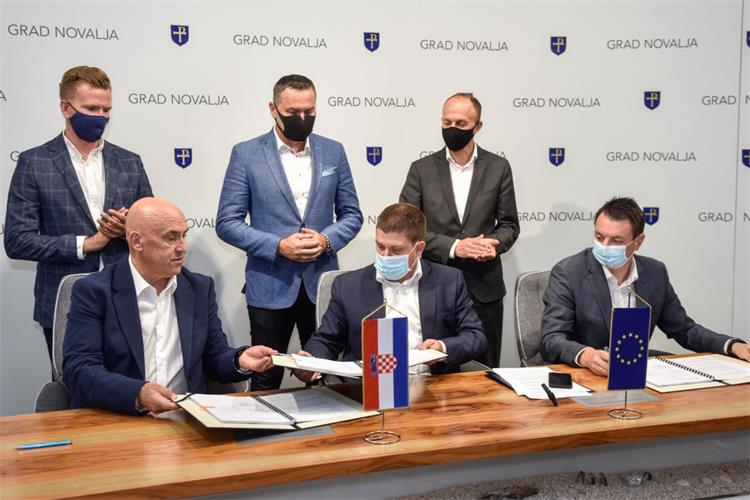 The grant contract for the Primorska Street reconstruction project, signed on Friday, is worth close to €3.8 million. The intervention will broaden Primorska Street and convert it into a two-way road.

At a ceremony held on Friday, 2 July 2021 in the Novalja Town Hall, attended by Deputy Prime Minister and Minister of the Interior Davor Božinović and Lika-Senj County prefect Ernest Petry along with other guests, a grant contract was signed for the project Reconstruction of Primorska Street in Novalja. The grant contract, awarding 85% in Cohesion Fund support and 15% in State Budget support to the €3,8 million project, was signed by the Minister of the Sea, Transport and Infrastructure Oleg Butković, Director of the Central Finance and Contracting Agency Tomislav Petric and Mayor of the City of Novalja Ivan Dabo.

Primorska Street is a seaside road that represents the sole entrance to the port open for public transport Port of Novalja-South. The intervention will expand Primorska Street into a two-way road with improved road, drainage, cycling and pedestrian infrastructure. The modern look of Primorska Street will be completed with the addition of solar benches, solar bus shelters, installation of horizontal signaling that facilitates disabled access, and suitable landscaping.

Change for the better in Novalja

State Secretary at the Ministry of the Sea, Transport and Infrastructure Josip Bilaver described the reconstruction as an appetiser with new investments to come. “As far as Novalja itself is concerned, this is an access road leading to the new port, that will also be financed with European funds. Momentarily work is underway on the documentation, on the project application and we expect the contracting of that valuable project by the end of this year.” – the State Secretary announced.

The changes wrought by the reconstruction of Primorska Street, in conjunction with the planned reconstruction of the port open for public traffic Novalja-South, were described by Novalja Mayor Ivan Dabo: “These are revolutionary matters that will fundamentally alter the current situation and set a higher standard, not only for the functioning of transport, and provide an architectural form which the town of Novalja needs, especially on the waterfront from which all the impressions, influences and effects on the townspeople of Novalja and our visitors flow.“

The reconstruction will, by reducing summer road congestion, increase safety for road users and reduce the risk of traffic accidents. Facilitated access to the Port of Novalja is a boon to all residents of Novalja, particularly those who are forced to commute to the mainland for employment, education, health care and other reasons of vital importance.

Over a billion kuna for port infrastructure

The Ministry of the Sea, Transport and Infrastructure enabled the project to be funded within the Second call to finance upgrading of maritime port infrastructure in order to improve coastline maritime traffic, previously used to support 20 island connectivity and small maritime port renewal projects.

At the signing, Minister Butković expressed his willingness to continue generous financing of port infrastructure projects using EU and national funds. “The project we are presenting and any project like it is financed at a rate of 85 percent using non-refundable grants, but it is also important to point out the Ministry provides the remaining 15 percent, so every town and port authority actually has 100 percent of expenditures covered. All that is left to them is the preparation of project documentation“, he concluded after the contract signing. The Minister also referred to the availability of funding in the years to come, as he stated: “In the financial perspective for 2021-2027 we once again have 120 million euro available, and hopefully even slightly more. This translates to an added impulse of over one billion kuna for investments, or an opportunity for all port authorities, cities, municipalities and their projects.”

Director Petric, whose agency is responsible for the management of grant contracts, reported that Cohesion fund support is currently used to finance 20 projects of port infrastructure improvement, not including the most recent project in Novalja. As many as 15 projects have reached the works stage, while 5 projects are engaged in public procurement procedures. By the end of 2021, works will be finalized in 5 ports, and they will be open for traffic, while the full completion of all contracted projects is expected by the end of December, 2023.