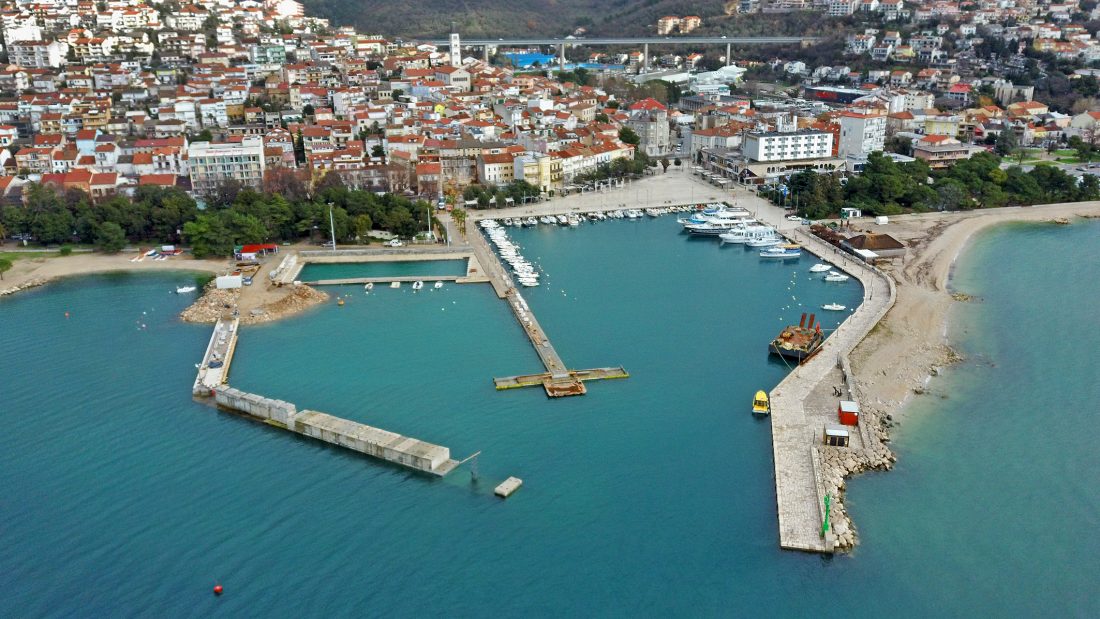 The project 'Upgrading the port open for public transport of county importance in Crikvenica' is entering the final stage of construction. The improvement of the port infrastructure in Crikvenica is necessary for the smooth operation of the county ferry line Crikvenica - Šilo (island of Krk).

On Monday, the Crikvenica County Port Authority announced that the Crikvenica port upgrade project is entering the final stage of construction and the new dock for boats operating on the county fast boat line Crikvenica – Šilo (island of Krk) will be ready ahead of the upcoming tourist season. The implementation of the project will improve the passenger transport service throughout the year, increase their safety and improve the conditions for employment, education and access to medical care for the inhabitants of the island of Krk.

Photographs of the port of Crikvenica show the new western breakwater in an advanced stage of construction. Also visible is the final outline of the reconstructed protective pier, displaying the intended regular “T” shape.

The director of the Crikvenica County Port Authority, Mario Kružić, provided a detailed description of the ongoing works: “At the moment, all the concrete prefabricated elements that make up the Mala Palada have been installed, giving it its final shape. Also, the execution of stonework has begun, i.e. the installation of stone covers and claddings. As far as the western breakwater is concerned, in the first 50 meters stonework is being carried out on the installation of stone covers as well as on the paving of the walkway, while on the remaining part of the breakwater, one of the preloading cycles for the concrete blocks forming the breakwater body is in progress.” – the director pointed out. He added that concreting of the sixth and final revetment on the western breakwater is planned in the near future.

The Crikvenica port upgrade is a project worth nearly 4,4 million euros. Primarily thanks to the expected benefits of improved transport connections for the inhabitants of the island of Krk, it is financed through the Operational Programme “Competitiveness and Cohesion 2014-2020” with a 3,7 million euro Cohesion Fund grant.

The improvement of the port infrastructure in Crikvenica is necessary for the smooth operation of the county ferry line Crikvenica – Šilo (island of Krk). In its current form, in which the service is provided by a fast passenger boat operating year-round, the line has been in operation since 2017.

The first regular steamboat lines between Crikvenica and the island of Krk were launched in 1905. Half a century later, the establishment of the ferry line Šilo – Crikvenica in 1959 prompted a major economic and population rise for Šilo and the northeast of Krk.