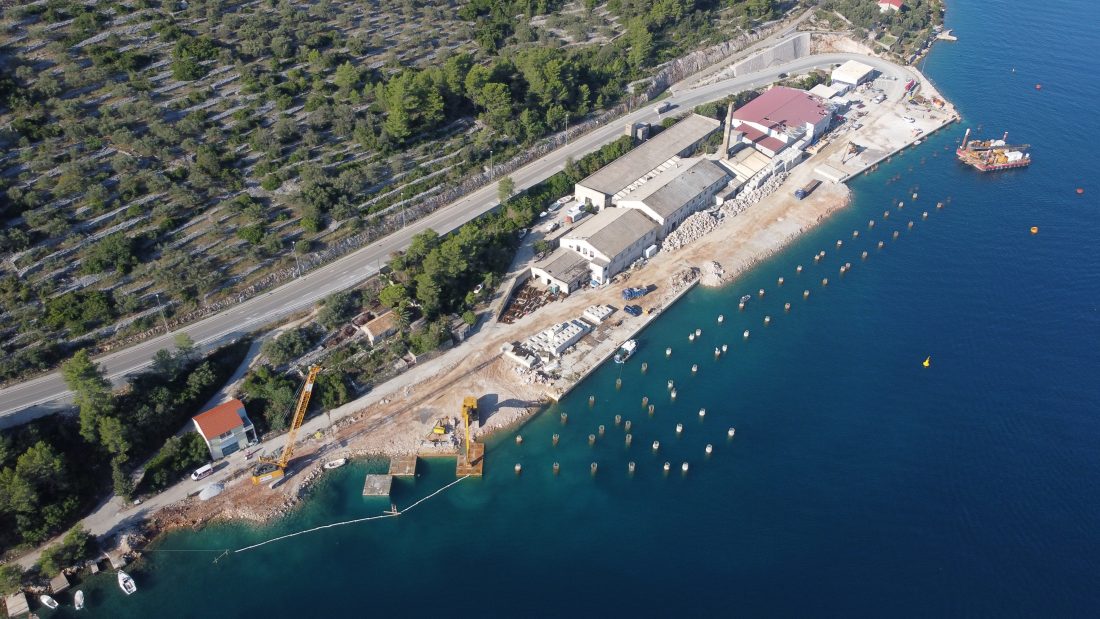 At the construction site of the ferry port Vela Luka, works on the load-bearing structure are coming along nicely. Should the contractor proceed at the current pace, Vela Luka should have a suitable terminal to receive domestic and international ferry lines by autumn of 2022.

The works on the capital project of constructing the maritime passenger terminal in Vela Luka are 25 percent complete. This is an indication that the works, started in late May, are progressing at a high intensity.

The hefty €10 million works contract stipulates 18 months to execute the project. County Port Authority Vela Luka is responsible for the implementation of the project. The Port Authority believe the possibility exists that the action could be completed ahead of the contractual deadline.

This is welcome news, considering Vela Luka is the second-largest port infrastructure project financed with EU support. Another future asset for the island of Korčula – the new port of Polačište – occupies the top spot.

In Vela Luka, 515 m of shoreline will be expanded to accommodate 3 ferry berths. The port will thereby gain the capacity to receive two 70-meter ferries and a single 150-meter ferry. The expansion will increase the port operational area, used during the ferry embarkation/disembarkation, by 18 and a half thousand square meters.

So far, the works revolved around driving concrete piles into the seabed, building the foundation and constructing massive supporting pillars. These will support the structure that will be added later. Looking at the load-bearing elements rising from the sea offers a glimpse at the scale and subsequent finished appearance of the terminal.

Infrastructure keeping up with demand

Asked about the expected benefits of the €14.8 million project, the County Port Authority Director, Boris Žuvela, offered an explanation. “This is an extremely important project for Vela Luka, and Korčula as a whole. It is about connecting the island with the mainland. Boarding vehicles traveling to Split is possible only in the port of Vela Luka, and the number of passengers and vehicles booking passage on this line is growing each year. The existing ferry port is simply unable to keep up with such an increase. We are running into physical limitations and can not proceed without a new port. The new terminal will improve the mooring conditions for ferries, which brings more passengers and vehicles in the long run, facilitates transport to the mainland and, hopefully, leads to the introduction of additional lines.” the Director said.

The necessity of building new port infrastructure is recognized in the Operational Programme “Competitiveness and Cohesion 2014-2020”. As part of the program, €10.3 million was provided for the construction of the terminal from the Cohesion Fund, and €1.8 million from the State Budget.