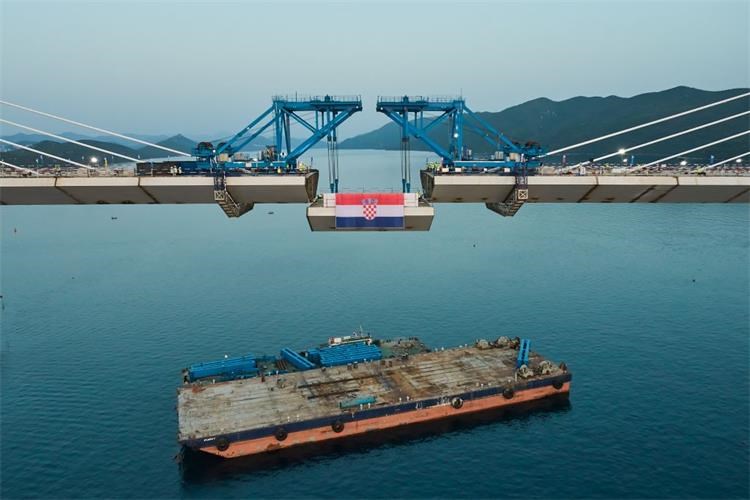 The raising of the final, 165th segment of the steel span structure was marked at a ceremony, fully joining the Pelješac Bridge from Komarna to Brijesta, and connecting Croatian territory that had been isolated and insufficiently integrated for centuries. Construction of the Pelješac Bridge presents the Croatian south with an opportunity to establish transport links with the rest of Croatia and helps preserve its status as the Croatian tourist mecca.

The raising of the final, 165th steel span segment, fully joining the Pelješac Bridge between Komarna and Brijesta, was celebrated at a late night ceremony held yesterday. The celebration welcomed numerous notable attendees, including Prime Minister of Croatia Andrej Plenković, Speaker of the Croatian Parliament Gordan Jandroković, Minister of the Sea, Transport and Infrastructure Oleg Butković, Dubrovnik-Neretva County Prefect Nikola Dobroslavić and Chairman of the Management Board in Hrvatske ceste Josip Škorić.

Joining of the Pelješac Bridge, 2.4 km in length, linked the territory of Croatia that was isolated and insufficiently integrated for centuries prior. The Pelješac Bridge infrastructure project presents the Croatian south with an opportunity to establish transport links with the rest of Croatia and leverage the improved transport connectivity to preserve its status as the Croatian tourist mecca, as well as cast itself as a driver of the country’s economic and tourist development. In the words of Transport and Infrastructure Minister Oleg Butković, this is “the project to end all projects” that will fundamentally alter the transportation picture of Croatia.

Prime Minister Andrej Plenković stressed the significance of cooperation in realizing the project. “This is the physical joining which is a huge event. Many have contributed, many governments, MPs, experts, actors… It has reached the stage of finalization under our Cabinet, but this is a common Croatian project. Everyone gave something, and we realized it in the moment when we were strongest. Everyone made an attempt, but we reached the stage when things came together“, was the Prime Minister’s message.

The basic transport function of Pelješac Bridge is to cross the Bay of Mali Ston between Komarna on the mainland and Brijesta on the Pelješac peninsula. In addition, one of the main goals of the project is to enable a continuous road connection on the territory of the Republic of Croatia. Thereby conditions will be realized for faster and easier access to Dubrovnik-Neretva County, without the need to cross the state border with neighbouring Bosnia and Herzegovina.

Pelješac Bridge – the symbol of an integrated Croatia

The Pelješac Bridge was a governing strategic idea for the transport development of Croatia, and simultaneously a central part of the Ministry of the Sea, Transport and Infrastructure’s policy in recent years, in cooperation with the Government of the Republic of Croatia and EU institutions. Works on the bridge’s construction began in July 2018. The project, which includes the construction of the Ston bypass and other access roads, is planned to be completed by the summer of 2022, according to minister Butković.

“EU funding enabled us to embark on major infrastructure projects, the Pelješac Bridge is one of them, and 85 per cent of the funding is in non-refundable grants. This is not only the bridge, but also 30 kilometres of access roads. Following today’s ceremony marking the joining of Croatian territory, works will continue. What comes next is the completion of the bridge and access roads, and next year ahead of the tourist season it will be open to traffic“, the Minister said.

The total value of the Road connection to south Dalmatia – Pelješac Bridge project is €536 million. The eligible costs are €428 million in total, with an EU contribution of €364 million.

The function of a bridge is to connect, bridge and unify. The Pelješac Bridge is much more than a mere structure. In adds a new symbol to the treasury of Croatian heritage, the symbol of a modern, integrated Croatia, which brings together and inspires anew with its architecture. The realization of this infrastructure project will reflect on the everyday life of people in south Croatia and the lives of countless visitors, as well as all of Croatia’s inhabitants.