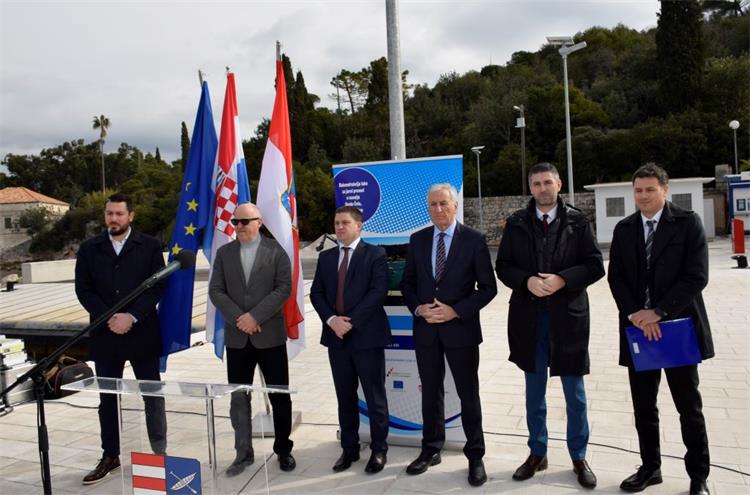 Minister of the sea, transport and infrastructure Oleg Butković attended the ceremonial opening of the reconstructed port in the settlement Donje Čelo on the island of Koločep, during his visit to Dubrovnik-Neretva County on 16 March. Along with minister Butković, the ceremony was attended by the Prefect of Dubrovnik-Neretva County Nikola Dobroslavić, deputy prefect Joško Cebalo, Mayor of Dubrovnik Mato Franković and MP Branko Bačić.

The extension of the pier and deepening the draft in port of Donje Čelo was necessary in order to introduce a regular year-round passenger line. A faster ship and reduced embarkation waiting time will shorten the duration of trips between Koločep and Dubrovnik. For the inhabitants of Koločep this could mean a burst of life in winter, when the island typically goes into hibernation, improved access to medical and social services, and education.

The reconstruction of the port is a linchpin in the island’s development, allowing the island to live to the fullest throughout the year. The aspects of economic development and a restoration of the island way of life were emphasized by the speakers at the ceremony.

Mayor of Dubrovnik Mato Franković pointed out that the restored waterfront and the reconstruction of the port as a whole will reflect positively on the life of island residents.

“The quality of life for many inhabitants is truly being raised, those who decided to live on the island. This is our goal, that people, no matter where they live, have high quality infrastructure, connection, feel well and comfortable and not like an afterthought. Projects like this make it possible. It is up to us to continue working and investing in our islands, construction of water supply and drainage networks and thereby, along with high quality transportation, offer an additional reason to remain on the island 365 days a year, instead of just visiting.“, mayor Franković said.

Port infrastructure is indispensable to a maritime country

Prefect of Dubrovnik – Neretva County Nikola Dobroslavić provided an overview of the investments in the county and expressed his thanks to the Government of the ROC for the mutual cooperation and support which is behind the renewal of port infrastructure in the county area. He noted the importance of investments in the Puntin breakwater on the island of Korčula, port of Orebić, as well as ports in Trpanj, Drače and Račišće and the relevance of constructing the maritime passenger terminal in Vela Luka.

“We are a maritime nation, we live off the sea and naturally, abundant investments in port infrastructure were indispensable. Following the construction of infrastructure, what remains is upgrading this passenger line. The procurement of new ships is proceeding, and one of the ships will be destined for the Elaphiti Islands for which the funds were secured from the National Recovery and Resilience Plan. Thus, the work is not finished and we are moving forward with projects along the Croatian coast. I call it Renaissance on the Croatian Coast“, minister Butković mused.

The “Renaissance” artists working on the project in Donje Čelo on Koločep happened to be Croatian and Italian. The €4 million reconstruction was realized by the companies TEXO MOLIOR out of Cavtat and Impresa Costruzioni Mentucci Aldo from the town of Senigallia. The project was financed as part of the Operational Programme Competitiveness and Cohesion 2014 – 2020, with €3.4 million from the Cohesion Fund and €600.000 from the national budget.