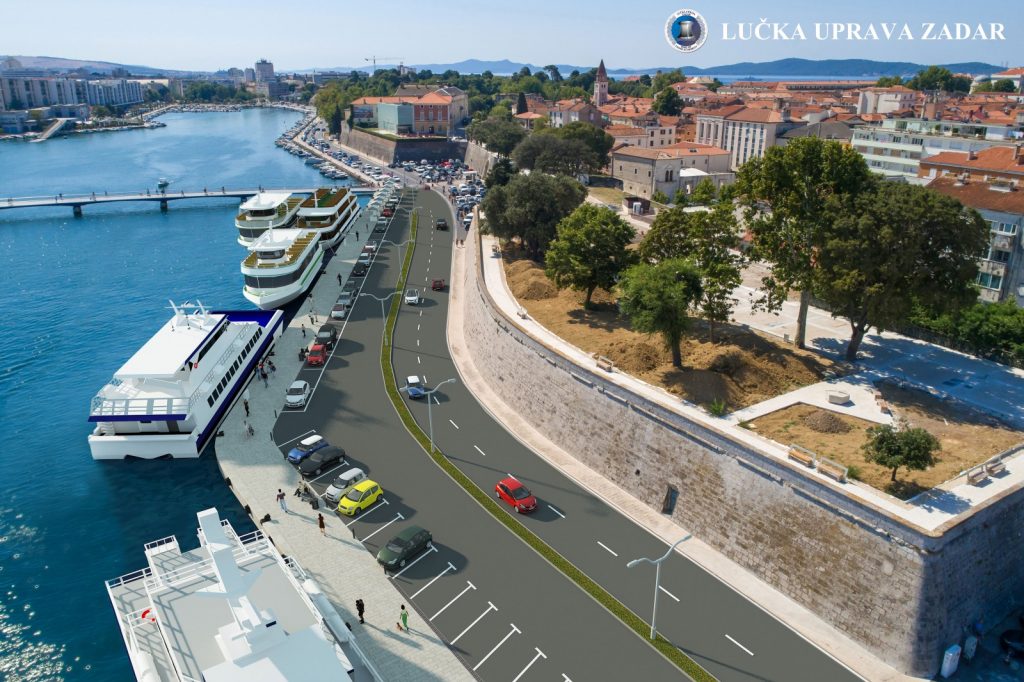 The port infrastructure works on the peninsula in the centre of Zadar, worth €9 million, are expanding to the Liburnska Coast. Phase I, lasting until the end of December, will see the reconstruction of 130 m of shore centred around the town bridge.

The Zadar waterfront reconstruction project, begun in July with the works on the Coast King Petar Krešimir IV, is entering a new stage. To mark the occasion, Port Authority Zadar called a press conference for Friday, 1 October, where they presented the progress of their biggest project.

“The paving was removed from an area of around 1.000 sq. m, 580 cubic metres of material was excavated, underwater and above ground. Likewise, approximately 140 of the 530 concrete foundation walls have been constructed in the length of 120 metres. We started on the construction of the surface wall, 12 metres have already been built and we have started preparation for the delivery of paving stones. The works are progressing according to plan. I believe that by next season we will have completed 70 per cent of the works on the lower waterfront so we don’t disturb the next tourist season any more than this season“, the Director of Port Authority Zadar Robert Škifić pointed out.

Starting on Monday, the works are extending to engulf the Liburnska Coast, initially a 130-meter section from the town bridge in a north-western direction. In time this stage will come to include the reconstruction of 600 metres of shore, pedestrian surfaces and five former ferry ramps.

The problems facing the eastern portion of Liburnska Coast are inadequate rainwater drainage and the slope of the promenade facing the carriageway. This leads to the formation of cracks, and following periods of rain, large puddle form on the concrete section of the promenade. The reconstruction will fix the damaged surfaces, and adapt the infrastructure to the vessels docking on the northern part of the peninsula.

Considering the role of Liburnska Coast as a ferry landing and an important thoroughfare in the city centre, the Port Authority Zadar were faced with a challenge. The requirements of the contractor had to be reconciled with the interest of the citizens in keeping the landing and adjacent parking spaces open throughout the period of construction. This was dealt with by dividing the Liburnska Coast into three phases, so only a third is closed to traffic at any time. Phase I, started today, will last until the end of December, and it includes the aforementioned section starting at the town bridge.

The total value of the project “Reconstruction and construction of port infrastructure City of Zadar – Peninsula” is close to €9 million. It has received support from the EU in the amount of €7.5 million from the Cohesion Fund, while approximately €1.3 million have been reserved in the State budget. Along with the reconstruction of Liburnska Coast, the money will go towards the reconstruction of 900 metres of Coast King Petar Krešimir IV and an upgrade of the existing pier on the Coast.