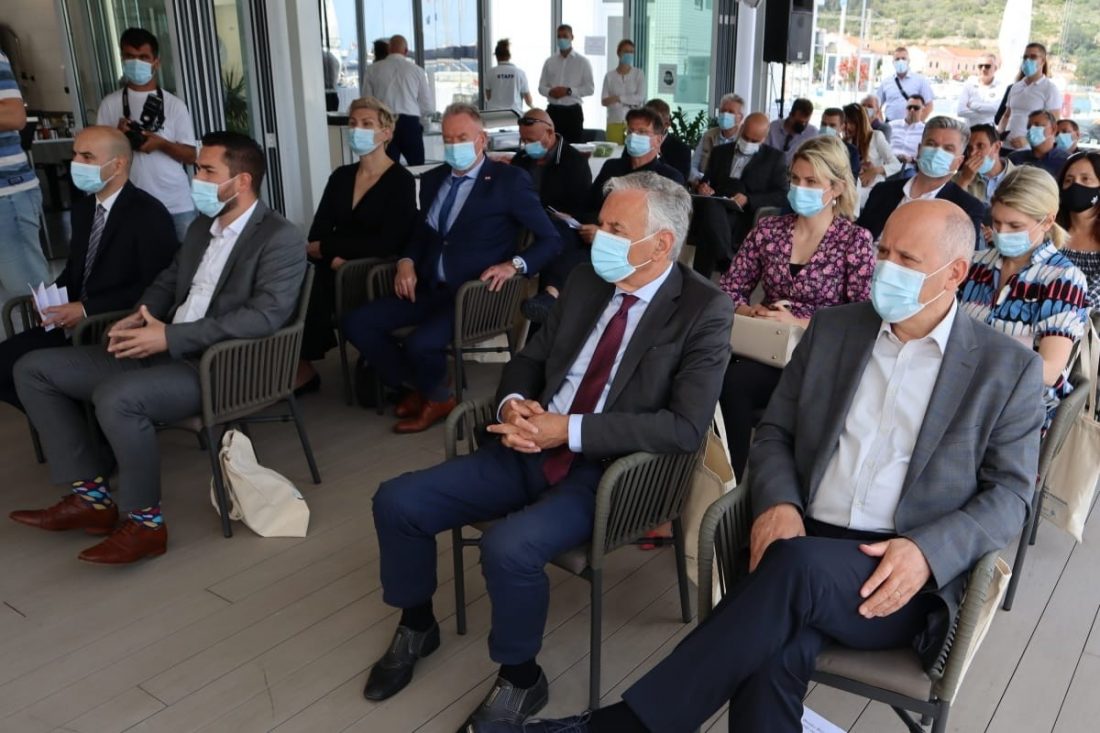 On Thursday, May 27, a conference for the project of building a maritime passenger terminal in Vela Luka worth €14.8 million was held in Marina Korkyra. It is one of six port infrastructure improvement projects funded by the EU in Dubrovnik-Neretva County.

On Thursday, May 27 a conference was held at the Marina Korkyra, to announce the start of construction on the maritime passenger terminal in Vela Luka. The conference assembled representatives from institutions which guided the €14.8 million project to the implementation stage. Front row seats were reserved for member of Croatian Parliament Branko Bačić, prefect of Dubrovnik-Neretva County Nikola Dobroslavić and his deputy Joško Cebalo, Ministry of Regional Development and EU Funds delegate Milivoj Dragičević, mayor of Vela Luka Municipality Katarina Gugić and the director of the Coastal Liner Services Agency Paula Vidović. The implementation is now the responsibility of the project coordinator, County Port Authority of Vela Luka, represented at the conference by the President of the Management Board Marija Radman Barčot and Director Boris Žuvela, and the contractor Pomgrad Engineering Ltd., with Board President Nikša Musulin in attendance.

In the official part of the conference program, those assembled were presented with images of the final shape the new terminal will take, following 18 months of construction. In the course of the works valued at €10 million, nearly 500 m of new shoreline will be built with three ferry slips, two for 70 m ferries and one for 150 m ferries. 18.000 m2 of the shoreside zone will also be redeveloped, forming embarkation waiting areas, a car park and the necessary handling area. The new terminal is located at the site near the former “Jadranka” sardine canning factory, and will free the center of Vela Luka from ferry traffic.

The project goal was briefly stated by delegate Milivoj Dragičević from the ministerial Directorate for Islands. “The project will contribute to improving island connectivity, the quality of life on this part of Korčula and in any event provide a major benefit to the town of Vela Luka itself.” he pointed out.

Prefect Dobroslavić congratulated his associates and declared himself pleased with the success of the County in promoting island connectivity: “This is one of the island connectivity projects. We placed tremendous attention and great emphasis on it in our current term, which is at the very end, and we have succeeded in jump-starting seven projects for improving island connectivity. They are projects which already have financing decisions, from EU funds as a general rule, to a lesser extent domestically funded. This includes Ubli, Vela Luka, Polačište, Puntin, Trpanj, Donje Čelo, Cavtat, and we have two more ports ahead of us – Perna and Prigradica. We are certain all of these projects will be realized on time and we will provide what the islands really need, what they are entitled to, which is quality connections and thereby a uniform quality of life on the islands, such as exists on the mainland.”

MP Bačić labelled the terminal construction in Vela Luka a capital and strategic project for the island of Korčula. “Investment in port infrastructure is necessary and this is a terrific project that will open up new horizons and development opportunities for Vela Luka, economic and tourist. Investments of this magnitude, as far as I recall, were not around on the Croatian coast. The entire coast is a construction site. Numerous ports are in development, in Dubrovnik-Neretva County alone around 800 million kuna is being expended in the port sector, significantly contributing to improved quality of life on Croatian islands.” he stated, adding that the completion of the projects currently in implementation, including the building of Pelješac Bridge and the highway on Korčula terminating in Perna, will shorten travel times between Korčula and the rest of Croatia by two hours.

The project “Construction of the Maritime-Passenger Terminal Vela Luka” is implemented as part of the Operational Programme “Competitiveness and Cohesion 2014-2020”. The total cost of the project is €14.831.055,68. Sources of funding include the Cohesion Fund grant, contributing €10.292.227,83 and the national budget, where €1.816.275,50 has been earmarked.