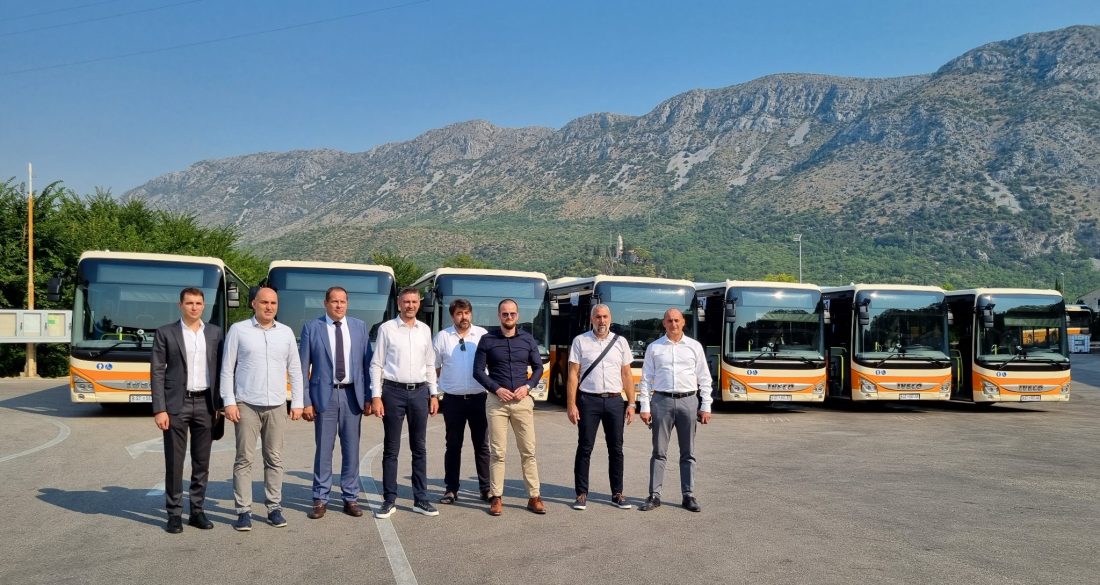 Seven new 12-meter Iveco buses were presented to the public on Saturday, August 6, at the headquarters of the city company Libertas in Komolac. The buses were delivered to the Dubrovnik bus operator by distributer Autobus Ltd. The mayor of the City of Dubrovnik, Mato Franković, director of Libertas Dubrovnik Ltd. Franko Mekišić and Robert Vrhovski, representative of the bus supplier, addressed the media. In the coming weeks, deliveries of six city low-floor buses, three midi suburban buses and two articulated city low-floor buses are expected - making up the total of 18 new vehicles.

The procurement was carried out as part of the rolling stock renewal project financed with €3.8 million from the Cohesion Fund, thanks to securing support through the Operational Programme Competitiveness and Cohesion 2014 – 2020 (OPCC). The project plans to improve and increase the capacity of public urban transport through the modernization of the fleet and the procurement of 18 suitable, safe vehicles for transport on public service obligation routes.

Libertas will deploy the latest addition to their ever-younger fleet on suburban lines between Dubrovnik and the municipalities of Ston and Dubrovačko primorje. “These seven vehicles are intended for a mixture of urban and suburban traffic, these vehicles would be primarily intended for the Dubrovnik surroundings, that is, connecting the city with the neighbouring municipalities. The vehicles are powered by diesel engines, air-conditioned and equipped with disabled access ramps, but they are specific in that they are equipped with suburban seats, i.e. seats intended for longer rides” explained Robert Vrhovski, representative of Autobus d.o.o.

The mayor of Dubrovnik, Mato Franković, said that at the beginning of his first mandate, he emphasized that the goal was for the public city transport company to buy fewer buses with its own funds, and preferably use EU funds instead. Previously, Libertas already used ESI funds for the purchase of 11 buses, which have been in operation since May 2021.

In total, OPCC provided grants for the purchase of 412 public transport vehicles in 9 Croatian cities. A modern vehicle fleet contributes to increased comfort and availability of the public transport service, increased personal safety of drivers and passengers, reduced vehicle maintenance costs, and mitigating negative impact on the environment by reducing greenhouse gas emissions.