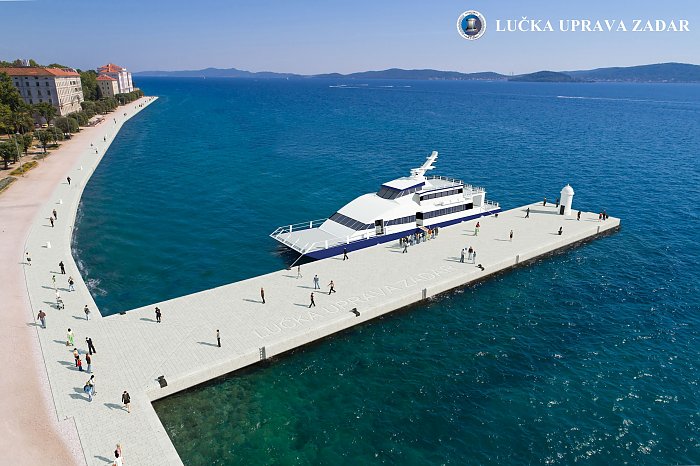 A contract was signed for the reconstruction of the Zadar waterfront worth approximately €6.4 million. Prefect Božidar Longin and Zadar Mayor Branko Dukić spoke about the significance of the project for Zadar at the ceremony.

Today in Zadar, the director of the Zadar Port Authority Robert Škifić and the management of the company Adriaing d.o.o. – Director Matjaž Andrejašič, Procurator Jože Andrejašič and Director of the Buje branch Nino Filipin – signed a contract for the reconstruction of the Zadar waterfront worth approximately €6.4 million. The signing ceremony was attended by the President of the Management Board of the Zadar Port Authority and the County Prefect of Zadar Božidar Longin and the Mayor of Zadar Branko Dukić.

The signing of the contract starts the 15 day countdown until the works begin. According to the plan, the works should take two years and three months to complete. In that period, 905 meters of the Petar Krešimir IV Coast will be reconstructed, and the pier on the Coast upgraded to enable the berthing of the line 409 Zadar – Preko. The Liburnian coast, on the other hand, will undergo the reconstruction of the 600-meter-long and 5-meter-wide shoreside section, which includes the coast and curbstones, pedestrian areas and five defunct ferry slips.

A waterfront to be proud of

A sense of civic pride was dominant among the guests at the signing. Prefect Božidar Longin spoke about the sights and experiences on which the identity of Zadar rests: “Along with St. Donatus the waterfront is certainly a symbol of Zadar and there are none among us who didn’t walk on it in our youth, dive off, bathe at the pier and live alongside it in various ways. The Zadar waterfront is, among other things, along with Queen Jelena’s Park, the lungs of the city, and it has a special significance: many Zadar residents took their first steps there, new loves were born … Today we are a step away from a great shift, for the first time the waterfront that was battered and destroyed by bombing will be completely rebuilt,” said Prefect Longin.

Mayor Branko Dukić addressed the contractors with the words: “This is akin to touching the stones of the church of St. Donatus, so act with care, responsibility and caution at the waterfront! The waterfront of our city is beautiful, it is an emotional song and in this emotional moment at the terminal I am reminded that the people of Zadar turn dreams into reality.”

The mayor did not fail to thank the Minister of the Sea, Transport and Infrastructure Oleg Butković and State Secretary Josip Bilaver for their support and promises kept. The Ministry played a crucial role in enabling financial support to the project from the Operational Programme “Competitiveness and Cohesion 2014-2020.” Thanks to compliance with the objectives of the programme, the €9 million project ‘Reconstruction and construction of port infrastructure City of Zadar – Peninsula’ received funding of around €7.55 million from the Cohesion Fund and over €1.3 million from the State Budget.