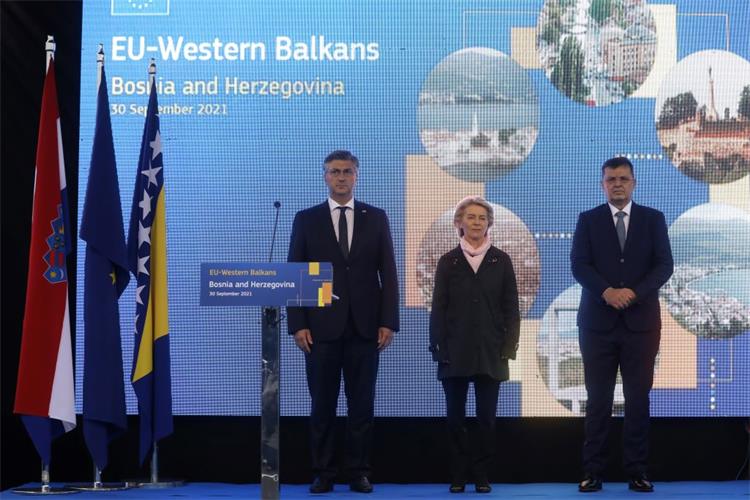 Opening the Svilaj bridge to traffic was the occasion for the arrival of European Commission President, Croatian PM and Chairman of the Council of Ministers of Bosnia and Herzegovina to Donji Svilaj. At the ceremony, the guests of honour sent out messages about bringing the Western Balkans closer to the European Union.

At the Bosnia-Herzegovina border crossing in Donji Svilaj, the bridge across the river Sava was opened to traffic yesterday. The construction of the bridge marks a new stage in completing the international Corridor Vc between Budapest, Osijek, Sarajevo and Ploče.

The media spotlight was drawn by the list of participants at the opening ceremony, where the places of honour were occupied by the President of the European Commission Ursula von der Leyen, prime minister of Croatia Andrej Plenković and Chairman of the Council of Ministers of Bosnia and Herzegovina Zoran Tegeltija.

The project in Svilaj is a joint investment by Croatian Motorways and the Ministry of Communications and Transport of Bosnia and Herzegovina, the object of an intergovernmental agreement. Representing the advantages of uniting for mutual benefit, the project is a role model of the type of cooperation advocated by the Croatian, Bosnian-Herzegovinian and European side.

“This is a special moment. The Svilaj bridge connects the EU and the Western Balkans. The EU invested 25 million euros in the construction, but perhaps the symbolism of the bridge outweighs the monetary investment. The essence of the bridge is connecting, building bridges between people, nations, countries, cultures, which is of utmost significance for our common future“, Ursula von der Leyen said at the ceremony.

The Svilaj bridge is an instance of imposing infrastructure overshadowed by its social significance. 660 meters long and 29 meters wide, it is significant as a point of contact between the motorway networks of Croatia and Bosnia-Herzegovina. It is also interesting that it was designed and built as two separate structures, with three lanes each.

In his address, Prime minister Plenković noted the importance of the bridge for the two neighbouring states, as well as its contribution to bringing them together.

“By strengthening infrastructural connections, we are connecting our peoples as well, connecting our economies, encouraging mutual investments and exchange“, Plenković said. The Prime minister sees a particular value in the project’s contribution to the completion of international Corridor Vc, and announced that Croatia will complete the remaining section between Osijek and the border with Hungary as early as next year. Before the route can be declared complete, Bosnia and Herzegovina has to build a further 200 km of motorways between Svilaj and Bijača.

The price of constructing the Svilaj bridge is €22.9 million euro, and the Croatian share in the investment is €11.45 million. 58 per cent of this amount was financed by the EU, drawing on the Connecting Europe Facility (CEF).