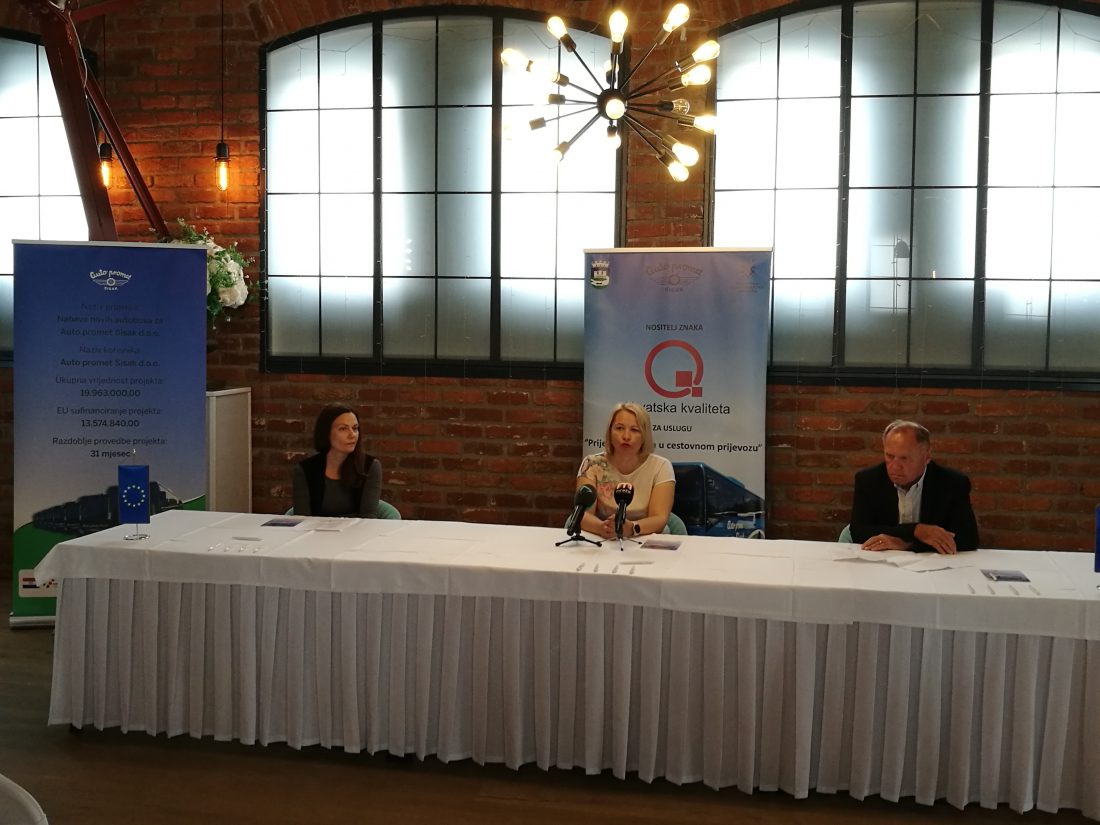 The initial conference for the project "Procurement of new buses for Auto promet Sisak d.o.o." worth about €2.6 million was held today. The project envisages the procurement of 9 new buses. New buses will provide a modern, safe and reliable public transport service.

Today at 10 a.m. at the ceremony room of the Cocktail restaurant in Sisak, the initial conference was held for the project ‘Procurement of new buses for Auto promet Sisak d.o.o.’ The conference was attended by representatives of the City of Sisak, the Ministry of the Sea, Transport and Infrastructure, which secured EU support for the project, and the Sisak bus service operator, responsible for the implementation of the project.

The official part of the programme featured an address by the Mayor of Sisak Kristina Ikić Baniček, Auto promet Sisak Director Darko Majić, and Head of Sector at the Ministry Directorate for EU funds and Strategic planning Ina Topić.

Mayor Ikić Baniček stressed the role investments in vehicle fleet renewal, exceeding €9.2 million in the 2016-2021 period, played in transforming Auto promet Sisak into one of the most successful transportation companies in Croatia. Director Majić agreed that this kind of investment was a key element in attracting and retaining passengers: “A modern vehicle fleet will contribute to increasing the comfort and availability of the public transport service, increasing personal safety of drivers and passengers in public urban transport and reducing the harmful effects of air pollution.” – Majić said.

Head of Sector Topić highlighted the fact Auto promet Sisak has successfully applied to a Call for proposals launched by the Ministry of the Sea, Transport and Infrastructure for the second time. This is an important indicator that they were able to mobilize previous experience in writing project proposals and use it to improve passenger comfort and safety in Sisak.

Fleet renewal for a safer ride

The project presented at the conference is worth about €2.6 million, and includes the procurement of 9 new buses. Thanks to the support from the Operational Programme “Competitiveness and Cohesion 2014-2020”, €1.8 million was provided by the Cohesion Fund, significantly reducing the financial burden for the beneficiary. In order to implement the project, Auto promet Sisak will initiate a public procurement procedure, with applicants expected to deliver bids for 4 semi-low floor and 4 high-floor 12 meter buses, and one 8 – 8,5 meter bus.

The new buses, whose engines meet the most recent EURO 6 emission standard, will replace three EURO 3 standard vehicles and six EURO 4 standard vehicles, currently operating in the City of Sisak. The project is a continuation of the fleet renewal scheme, which started with the procurement of 20 buses, delivered in June 2019. In both instances, the purchase of new buses received EU funding which covers 85% of eligible expenditures.

Aside from the environmental benefits, the procurement will ensure a modern, safe and regular public transport service in the years to come. The quality of service would immediately suffer in the absence of the fleet renewal projects, given the average fleet age of 14,88 years. Obsolete vehicles discourage citizens from using public transport for their daily needs as long as an alternative exists, inflate maintenance costs and reflect on the operator’s bottom line.