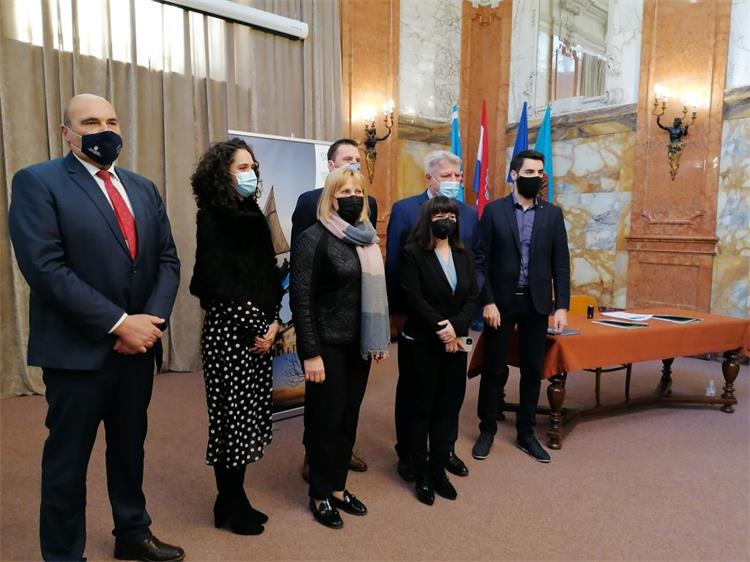 By signing the contract with County Port Authority, the consortium TEXO MOLIOR - Impresa Costruzioni Mentucci has taken on the commitment to complete the works on the upgrade of the port of Mrtvaška on the island of Lošinj within 22 months. With the completion of the upgrade, the capacity of Mrtvaška will increase to accommodate three to four 90-meter ships and many times the current number of passengers.

The Croatian-Italian consortium TEXO MOLIOR – Impresa Costruzioni Mentucci is set to carry out works on the extension of the port of Mrtvaška, on the island of Lošinj. Antonio Deranja put pen to paper representing the consortium, while Filip Balija, the director of the Mali Lošinj County Port Authority, did likewise for the client. The signing ceremony was held on Friday, January 15, 2021 in the monumental Marble Hall of the Maritime and Historical Museum of the Croatian Littoral Rijeka. The event was attended by Assistant Minister of the Sea, Transport and Infrastructure Siniša Orlić, Mayor of Mali Lošinj Ana Kučić and prefect of the Primorje-Gorski Kotar County Zlatko Komadina.

The value of the contracted works is 7,6 million euros, including VAT. These include the construction of a 125-meter coastal structure, with an operational plateau behind it, a 90-meter-long breakwater, and two ferry ramps. The added capacities will transform Mrtvaška from a tiny landing, with a pier for the docking of a 20-meter passenger boat carrying passengers to neighboring Ilovik, into a port capable of receiving coastal Ro-Ro passenger liners, High speed Craft, as well as smaller passenger boats. It will happily accommodate three to four 90-meter ships and many times the current number of passengers. The contractor has got a 22 month deadline, following onboarding, at their disposal to carry off this ambitious feat.

It is worth stressing that the extension of the port will not deprive the domicile population of their boat moorings in Mrtvaška cove. In fact, the project provides communal berths in the lee of the operational plateau, providing an additional level of safety at berth in relation to the existing arrangement.

Director Filip Balija summarized the contribution of the project: “The construction of the port and the introduction of new shipping lines will have a positive impact on economic flows on the islands, and consequently encourage young people to remain or return to the islands. The construction of the port of Mrtvaška is the largest project in ports open to public traffic in the Primorje-Gorski Kotar County, and the second largest in the Croatian part of the Adriatic.“

Upgrading the port open to public traffic in Mrtvaška, island of Lošinj is a 10,9 million euro project. Under the auspices of the Operational Programme Competitiveness and Cohesion 2014 – 2020 it has been awarded a 9,2 million euro EU grant from the Cohesion Fund, along with a national contribution of over 1,6 million euros. In the preparation and implementation of the project, the County Port Authority of Mali Lošinj have availed themselves of the experience gained in running their previous project “Rehabilitation and extension of the existing port of Unije – Phase II”, contracted in October 2018. Bringing the project in Mrtvaška to a successful conclusion will satisfy the preconditions for a maritime connection between Mali Lošinj and Zadar, as well as the neighboring islands, Rab and Pag in particular.