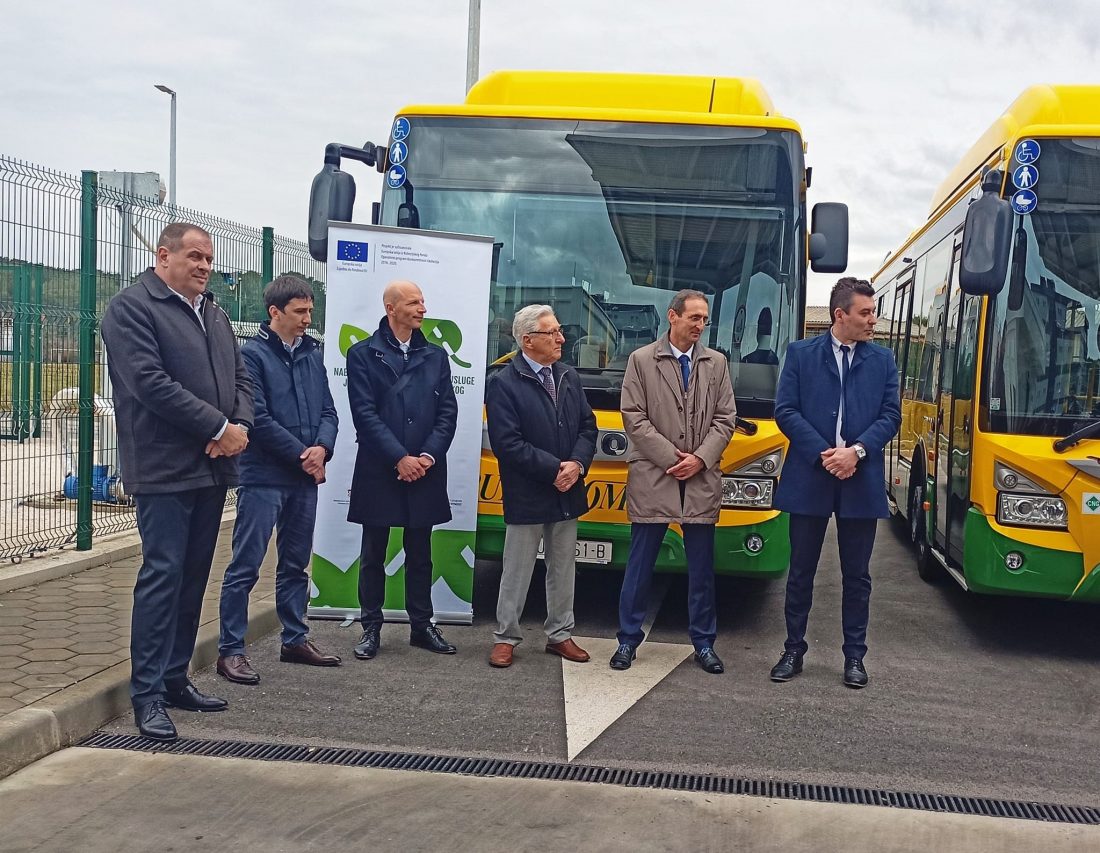 A ceremonial handover of 4 new, modern buses for the provision of public urban and suburban passenger transport to the carrier Pulapromet Ltd. was held in Pula today. Attending the celebration of the the purchase of new buses were the deputy mayor of Pula Bruno Cergnul, director of Pulapromet Ltd. Igor Škatar, director of Plinara Ltd. Pula Dean Kocijančić, director of Bus Ltd. Robert Vrhovski, Head of the Administrative Department for Sustainable Development Mirko Radolović and Director of the Directorate for EU Funds and Strategic Planning at the Ministry of the Sea, Transport and Infrastructure Damir Šoštarić.

The city of Pula, which is known as an important cultural center of Istria, grows in importance today, not only in the domain of culture and tourism, but also on the transport map of Croatia’s largest peninsula. The purchase of new buses is raising the level of public transport services in the city of Pula, thereby creating the preconditions for improved, higher-quality connectivity throughout Istria.

Reliable public transport and the reduction of the negative impact on the environment are some of the key benefits of the new urban-suburban bus fleet.

Going to work, school or a tour of the city will be much easier, faster, more reliable, and more environmentally friendly from now on.

Today’s ceremonial handover of the new buses is the result of excellent cooperation between the Ministry of the Sea, Transport and Infrastructure and Pulapromet Ltd. which was realised according to the joint Grant Contract signed in June last year. Mutual cooperation between the Ministry and the city carrier “Pulapromet Ltd.”, and the mutual effort to modernise the vehicle fleet, began much earlier, in September 2018. This was when the first joint Grant Contract was signed, for the purchase of 12 new vehicles meeting safety standards, that were delivered in mid-2019.

“Several years ago, just like today, modern buses that are changing the traffic reality of the city of Pula and the surrounding areas, were high on the list of transport priorities. The purchase of new buses affects the quality of life for many citizens, especially those whose daily lives depend on public transport. Since 2018, a total of €3.43 million has been invested in the purchase of buses for the City of Pula, and EU funding constitutes €2.91 million of that amount. As before, the Ministry of the Sea, Transport and Infrastructure will continue to invest in important transport projects that boost the development of numerous Croatian cities and counties, just like the City of Pula”, said the Director of the Directorate for EU funds and Strategic planning at the Ministry of the Sea, Transport and Infrastructure, Damir Šoštarić.