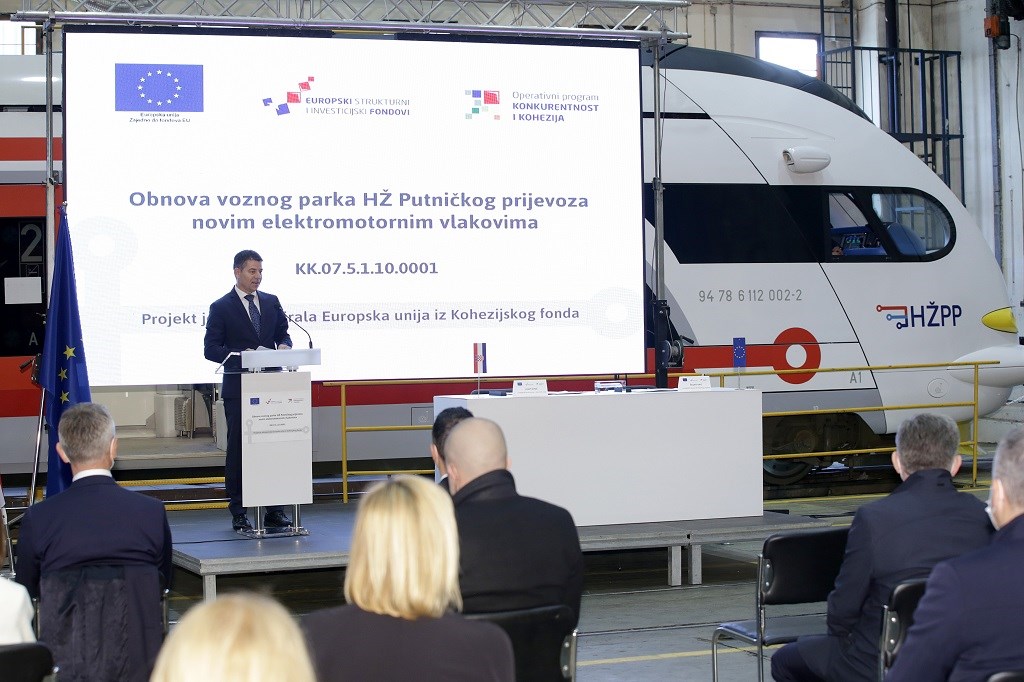 On 17th November 2020 a sales contract for 21 electric trains was signed at the Končar – Electric Vehicles HQ in Zagreb. Upon delivery, which is set to be completed by the end of 2023, the new trains will operate on the lines Savski Marof – Zagreb – Dugo Selo, Zagreb – Vinkovci – Tovarnik, Zagreb – Sisak – Novska, Zagreb – Koprivnica, Zagreb – Karlovac – Rijeka, Zagreb – Zabok and Vinkovci – Vukovar.

The purchase of the new trains is financed from the Operational Programme Competitiveness and Cohesion 2014-2020, in the course of a project to renew HŽ Passenger Transport’s rolling stock by new electric multiple-units. The implementation of the project will enrich the domestic rail carrier’s fleet by 11 electric multiple-units for urban-suburban transport and 10 multiple-unit trains for regional transport, making rail travel more reliable and comfortable for a large number of users.

HZ Passenger Transport CEO highlighted the importance of this contract for the company, and for economic development: “Today we are signing an important contract. It is important for us as a carrier because we will improve the service we provide to passengers by producing and launching new trains. Passengers on these trains will be provided with comfort and additional services that we cannot provide in older vehicles. Also, this agreement, with the support of EU funds, achieves multiple benefits for the Croatian economy, for the preservation of industrial production and jobs.“

Investment in railways set to continue

The Minister of Transport commented on the continuation of investments in railway transport with these words: “The transport sector has indeed proven to be one of the largest “consumers” of European funds, since today we are talking about more than 20 billion kuna of total investments, of which we have contracted more than a hundred projects and absorbed as much as 15 billion kuna through the Operational programme and CEF Instrument. Precisely in order to continue matching these results, we have continued to pursue large projects in this mandate as well, especially in the railway sector, such as this one.

In order to meet all these goals, especially in terms of increasing the speed and quality of traffic, we have set investment in high-quality and safe railway infrastructure as one of the fundamental goals of this mandate. This is a large investment cycle that we started four years ago and over 11 billion kuna has been invested so far, and in the next seven year period we estimate that investments in railways will exceed 22 billion kuna.“

The Prime Minister of the Republic of Croatia also expressed his satisfaction, thanking those involved in the project and adding: “What makes us especially happy is that these trains are conceived, designed and manufactured in Croatia. Such a train is first and foremost a high-tech product comprising sophisticated equipment and software solutions that have been purposefully developed in Končar. Therefore, it is first and foremost a great recognition for the Končar Group, but also for the numerous suppliers in Croatia who participate in the implementation of such projects.

We will strive to ensure that rail transport in all its aspects, passenger and freight, continues to be one of those branches of transport we will invest in, the modernization of which will benefit our passengers, especially children, pupils and students who use this mode of transport almost daily. Therefore, the funds available to us in recent years are an opportunity for a major investment watershed when it comes to railway infrastructure.“

Models in either series will be equipped with wheelchair access, bicycle storing areas and video surveillance, with free WiFi access provided to travelers. The multiple-unit trains also come with a GPS–GPRS system for mobile communication and global positioning, info displays and PA system for audio and textual station announcements, and a passenger counting system.

The delivery deadline for the first electric urban-suburban train is 24 months after contract signature, which will be followed by another 10 urban-suburban trains. Lastly, 10 trains for regional transport will be delivered. The final delivery is expected ahead of the December 2023 deadline.