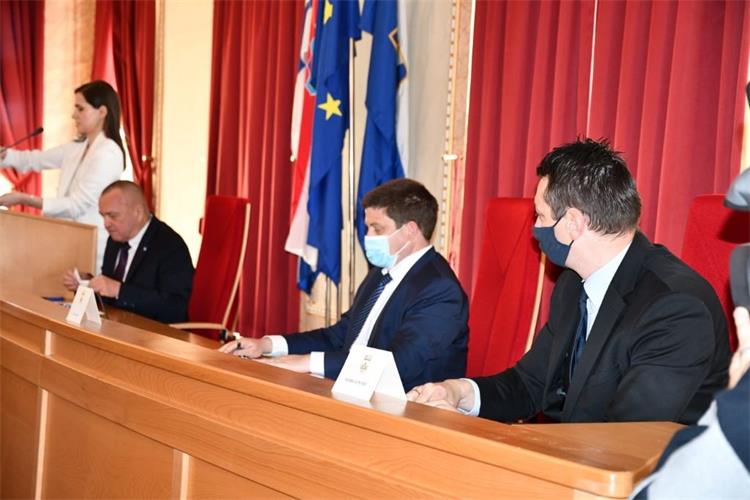 On Friday, May 21, two grant agreements were signed for the construction of an underpass in Sv. L. B. Mandić Street in Osijek and the procurement of new buses for GPP - the Osijek bus service carrier. The projects are worth €16.7 million combined.

On Friday, May 21, with Prime Minister Andrej Plenković in attendance, two grant agreements were signed to improve urban public transport and the intercity transport system, thereby promoting regional and local mobility. The Agreements in question were the contract for the construction of an underpass in Sv. L. B. Mandić Street in Osijek and the contract for the procurement of new buses for GPP – the Osijek bus service carrier.

The contract for the underpass construction project was signed by the Minister of the Sea, Transport and Infrastructure Oleg Butković, the director of the Central Finance and Contracting Agency, Tomislav Petric, and the Mayor of Osijek, Ivan Vrkić.

The project will construct an underpass in St. L B. Mandić Street under the Osijek-Zagreb railway, which involves the construction of two bridges (a road and railway bridge), construction of a road under the bridges, and construction of connecting roads with all required infrastructure (pedestrian and bicycle paths on the underpass and construction of public lighting, sanitary sewers and storm drain), which enables uninterrupted flow of traffic. The execution of project activities is intended to remove the bottleneck and prevent frequent traffic blockages in the wider city center of Osijek caused by stops and waiting at the level crossing and reduce the share of car travel in favor of public transport and cyclists while reducing travel time. Consequently, congestion and peak loads on all other routes in the transport system will be reduced, traffic flow will be accelerated, and traffic safety, security and health of all traffic participants will be increased, while noise and CO2 emissions will be reduced.

The total value of the project is €12.41 million which is also the amount of total eligible costs of the project and the grant amount, €10.55 million or 85 % of which will be financed from the Cohesion Fund, and €1.86 million or 15% from the State Budget of the Republic of Croatia.

The second contract, involving the procurement of new buses for GPP, was signed between the Ministry of the Sea, Transport and Infrastructure, the Central Finance and Contracting Agency, and GPP representatives. Adding to a prior contract, under which GPP procured 12 new buses, the 13 new ones scheduled for procurement under this Agreement will make the GPP fleet richer by a total of 25 new buses.

The GPP fleet numbers 38 vehicles, with an average age of 10.16 years, and is characterized by a large number of buses whose engines meet the EURO 2, EURO 3 and EURO 4 norm, which negatively impacts the environment.

The total value of the project is €4.3 million, and the total eligible costs amount to €3.45 million, while the size of the grant is €2.84 million which will be financed from the Cohesion Fund through the Operational Programme Competitiveness and Cohesion 2014- 2020. The remaining amount of €611.700 will be financed by the Beneficiary.

The Prime Minister Andrej Plenković pointed out that both projects are very valuable investments that raise the quality of life for the inhabitants of Osijek:

“I thank Minister Butković and Hrvatske ceste for an important project on Čepinska Road. The problem of the traffic jam will be solved by the substantial investment of 93 million kuna, with an 85% contribution from European funds, 15% from the Ministry of the Sea, Transport and Infrastructure, which will enable a better life and more manageable traffic here in Osijek.“