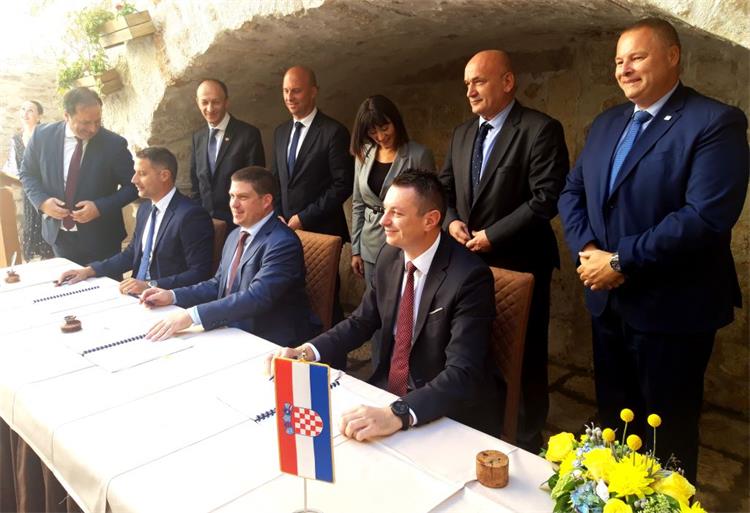 Minister of the Sea, Transport and Infrastructure Oleg Butković signed a Grant Contract for the project of reconstruction and rehabilitation of the coast in the Port of Rab. The €4,9 million contract is used to fund the construction of a secondary breakwater and the rehabilitation of the coast from the new breakwater to the Rab central town square - Varoš.

The Grant Contract signing ceremony for the project of reconstruction and rehabilitation of the coast in the Port of Rab was held yesterday in the courtyard of the Ducal palace, city of Rab. The signatories of the €4,9 million contract, financed from the Cohesion Fund and the state budget in the ratio 85:15, are the Minister of the Sea, Transport and Infrastructure Oleg Butković, director of the Central Finance and Contracting Agency Tomislav Petric and director of the County Port Authority Rab Nenad Debelić.

Aside from the aforementioned contract, thanks to which Rab will acquire higher quality port infrastructure, the Ducal palace was the site of the signing for a different contract, also promoting connectivity with the island of Rab. We are talking about the construction of a ferry slip in the port of Stinica, the port of call for the line 337 Stinica – Mišnjak (southern Rab).

The project in port of Rab resumes the reconstruction started earlier with the goal of completely modernising the port. Phase one involved the rehabilitation of infrastructure and the promotion of fishing activity on Pumpurela pier, valued at €2,7 million. The continuation of the reconstruction, which is the object of the new contract, involves the construction of a secondary breakwater of 44 metres in length, and the rehabilitation of approx. 400 metres of coastline from the new breakwater to the central town square – Varoš.

Nenad Debelić, director of County Port Authority Rab, announced the new phase of reconstruction was going ahead during Minster Butković’s visit to Rab in April this year. “This operation will ensure the conditions for ships to operate in the port of Rab year-round, offer a much higher standard and, most importantly, rehabilitate the coast which is truly delapidated, but the reorganisation of the port layout itself where berths are concerned will add another dimension in the tourist sense, from accommodating a much higher number of nautical vessels, yachts and tour boats, to the rehabilitation of the communal zone in the very center of the port of Rab” – director Debelić had said on that occasion.

Diminished impact of south-easterly wind and waves in the port basin, protection of the town centre from flooding, secure docking for ships in all weather conditions. These are but some of the key objectives the “Reconstruction and rehabilitation of the coast in the port of Rab” project seeks to realise. Ultimately, accomplishing these objectives creates the preconditions for the improved connectivity of Rab with other coastal destinations.