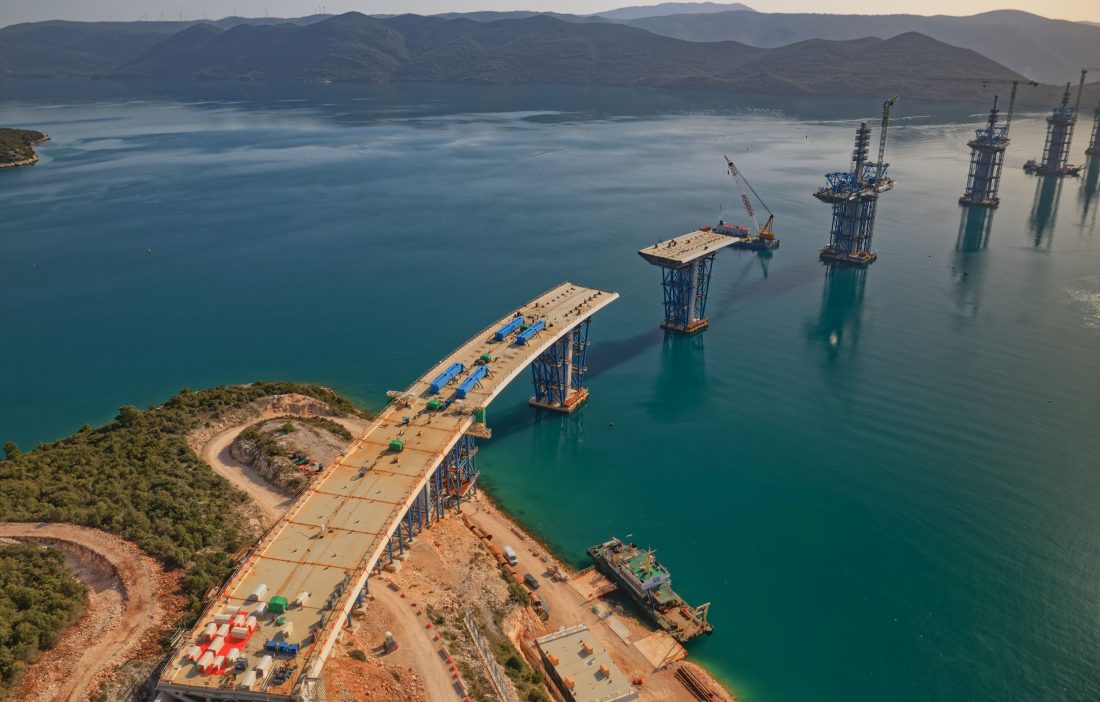 The installation of a steel section of deck connected the first pillar of the Pelješac Bridge to the abutment. Work on the longest bridge in Croatia is expected to be completed by the end of this year.

By having its first pillar connected to the mainland, Pelješac Bridge started its traverse of the Mali Ston Bay on Monday, February 15. The symbolic moment taking place on the construction site in Komarna was witnessed by the prime minister of Croatia Andrej Plenković, who was touring Dubrovnik-Neretva County alongside government ministers Josip Aladrović and Radovan Fuchs.

A single day was all it took for the workers of the China Road and Bridge Corporation to install the massive 52-meter steel section of deck weighing 587 tons, which links the nearest pillar with the abutment. The manoeuvre was performed using a floating crane, and took several days to set up. As new elements are added to the construction, it starts to become progressively easier to visualize what the longest bridge in Croatia is ultimately going to look like.

The Minister of the Sea, Transport and Infrastructure, Oleg Butković, commented on the early stage of superstructure construction. – “Today’s joining of the Pelješac Bridge structure indicates that the final realization of the entire project of connecting the south of Croatia is moving closer to completion. It is a really impressive operation that the Chinese contractors had been preparing for a few days and successfully performed today. The fact that the works on the bridge were not stopped at any time and that the contractors on the access roads accelerated their works as much as possible is encouraging and we are happy because it means that the first cars will already be able to drive on the Pelješac Bridge next year. Despite all the difficulties we encountered at the start of this project, today we are in a situation where the project will be implemented as we announced, which is yet another proof of how this government delivers on its promises,” said Butković.

Croatian Roads announced that the works on the construction of the bridge will be completed before the end of this year, and it will take an additional few weeks to equip it. The opening of the Pelješac Bridge for traffic will be preceded by a technical inspection and the issuance of a use permit. In line with that, the first vehicles could cross the new bridge in March or April 2022. While the access roads are still under construction, which should take until June, travellers will use the Brijesta junction and the county roads to reach the bridge.

The impressive dimensions of the bridge, which will require 33,700 tons of steel to construct, are a lasting testimony to the importance of the project to the goal of connecting the entirety of Croatian territory. The project of Pelješac Bridge and access road construction is worth roughly 550 million euro, and using the Operational Programme “Competitiveness and Cohesion 2014-2020” it is financed with 357 million euro of EU funds.