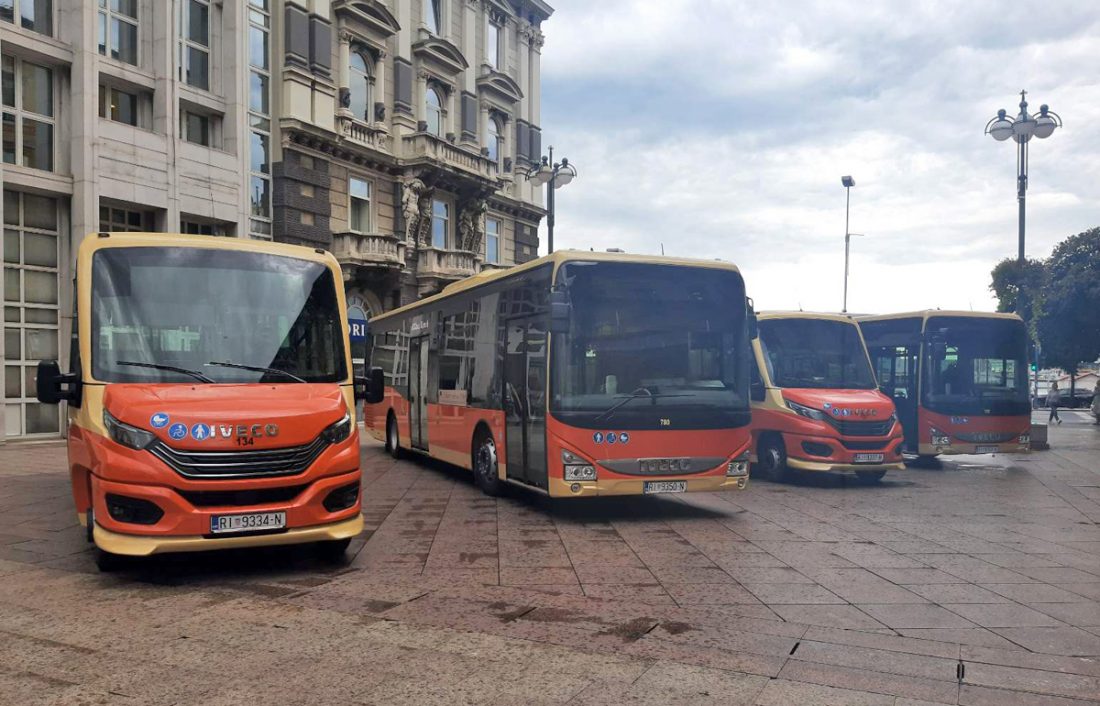 The bus terminal at the Delta in Rijeka took on the role of a showroom this Tuesday, as 23 new Iveco brand vehicles were presented, displaying the colours of the local bus company Autotrolej Ltd. The Director of Autotrolej Alberto Kontuš and Mayor of Rijeka Marko Filipović posed for the cameras alongside the latest acquisition.

Among the 23 buses at the presentation, there were 12 Crossway Low Entry type with a 90 passenger maximum, which cost €2.9 million (including VAT), and 11 suburban buses type Iveco Feniksbus, carrying 36 passengers, which cost €1.6 million (including VAT). The buses have been successfully acquired thanks to the €11 million rolling stock renewal project, funded with €7.4 million from the Cohesion Fund. The project anticipates the acquisition of an additional 14 diesel buses, to be delivered in August.

The purchase of a large number of new vehicles allows the replacement of old models servicing the 23 bus routes in the City of Rijeka area. This attempts to avoid the downward spiral of obsolescence, resulting in increased number of vehicle failures and rising maintenance costs, increased fuel consumption, reduced passenger and driver safety, longer operating intervals, inadequate comfort and accessibility.

All of the new vehicles meet the EU’s environmental requirements. Autotrolej’s director Alberto Kontuš warned this is not only an administrative condition for EU funding, but also improves the company balance sheet due to savings on fuel and maintenance.

“The continuation of the Autotrolej rolling stock renewal is also a continuation of the beneficial policy of cooperation with the competent ministry and the European Union. We are preparing for the next tranche of EU funding where electric vehicles are likely going to be in focus“, declared Rijeka Mayor Marko Filipović. The Mayor considers the improvement of urban and suburban passenger transport service to be the greatest benefit of the cooperation.

Analysis of the Autotrolej rolling stock performed in preparation for the project showed that, out of a total of 179 buses, 70 vehicles were between 11 and 18 years old, and as many as 36 vehicles were between 19 and 25 years old. With the acquisition of 37 new buses, the average age of the vehicle fleet was reduced to a mere 7 years.