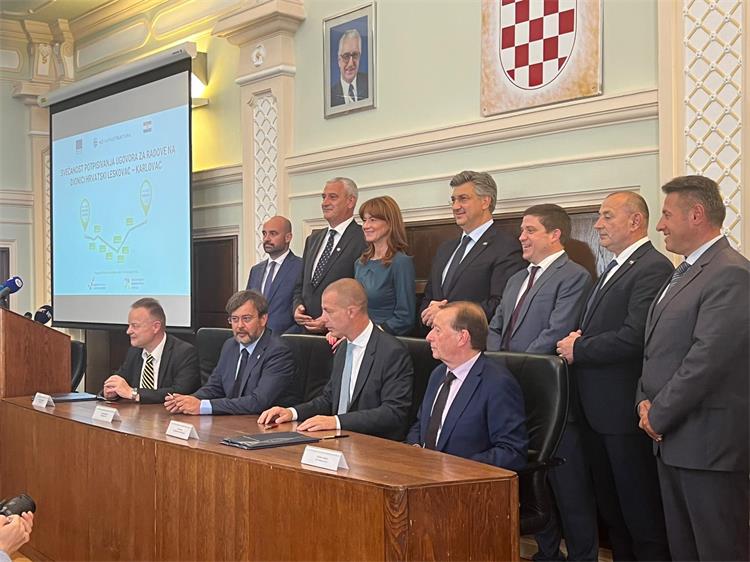 The Strabag consortium has been hired to perform the works on the engineering and power supply railway infrastructure subsystems for the project “Reconstruction of the existing and the construction of a second track on the Hrvatski Leskovac-Karlovac rail section”. The project of upgrading the 44-kilometre section is the largest railway infrastructure project in the Republic of Croatia, worth €363 million. AŽD Praha will perform the works related to the traffic management system, signal and communication systems on the section.

The section Hrvatski Leskovac-Karlovac is part of the M202 Zagreb Central station – Rijeka railway, on the Mediterranean TEN-T corridor, route Rijeka-Zagreb-Budapest. The section currently includes the stations Hrvatski Leskovac, Horvati, Zdenčina, Jastrebarsko, Draganići and Karlovac, and the stops Mavračići, Desinec, Domagović and Lazina. Certain parts of the existing railway have speed restrictions due to poor infrastructure conditions, despite a favourable terrain configuration. The speed on the section are between 75 and 140 km/h.

The implementation of the project will raise the maximum speed to 160 km/h, and expand the single-track railway to a double-track. The stations H. Leskovac, Jastrebarsko and Karlovac will be reconstructed, the stations Horvati, Zdenčina and Draganić downgraded to stops, and the stops rebuilt. Level crossings will be replaced with 3 safer underpasses and four new overpasses with adjacent roads. All existing bridges, viaducts and other structures on the section will also be reconstructed.

Prime Minister of the Republic of Croatia Andrej Plenković emphasized the European aspect of the project: “In the past years, we as a country have invested an extraordinary amount in transport infrastructure, and the decade ahead will be a period of investment in railway infrastructure. The fact that this project is largely financed using European funds tells us how important being a part of the European Union is. Railway transport is one of the safest and fastest modes of travel worldwide and it is important to be part of the European railway network. Today’s contract signing is an exceptional contribution to building the railway from Zagreb to Rijeka, a very important section for Croatia as a transport hub with a special emphasis on the Port of Rijeka. The better and higher quality our transport infrastructure is, the better the economic development and the pulse of the Croatian economy will become.” The European Union is funding the project with €308.4 million through the Operational Programme Competitiveness and Cohesion 2014-2020.

Government Vice-President and Minister of the Sea, Transport and Infrastructure Oleg Butković singled out the railway as a priority sector: “Active investment on the Mediterranean corridor, including the contracts signed today, totals approximately €800 million and, importantly, with today’s signing we are moving toward Rijeka. This year we are going to open the modernized and electrified section Zaprešić – Zabok and the reconstructed section Savski Marof – Zagreb Zapadni Railway Station and publish a request for tender for the section Dugo Selo – Novska on the formed Corridor X, toward the east of the country. There will be investments in other modes of transport, but in the next ten or so years railways are going to see the most investment. This is the decade of the railway. We want Croatia, just as it has modern highways, to have a railway system and infrastructure at an enviable level. Planned investment by 2030. amounts to €3.5 bn, a mostly it will be directed to the RH1 and RH2 corridors.“

Representatives of the consortium STRABAG AG, STRABAG Ltd. and STRABAG Rail a.s. expressed satisfaction with their arrival on the scene. “We are looking forward to working with a new client and we expect to prove the excellence and reliability that is expected of us on this project as well.“, they proclaimed at the signing. The long-awaited start of the works is scheduled within 42 days from the date of contract signature.