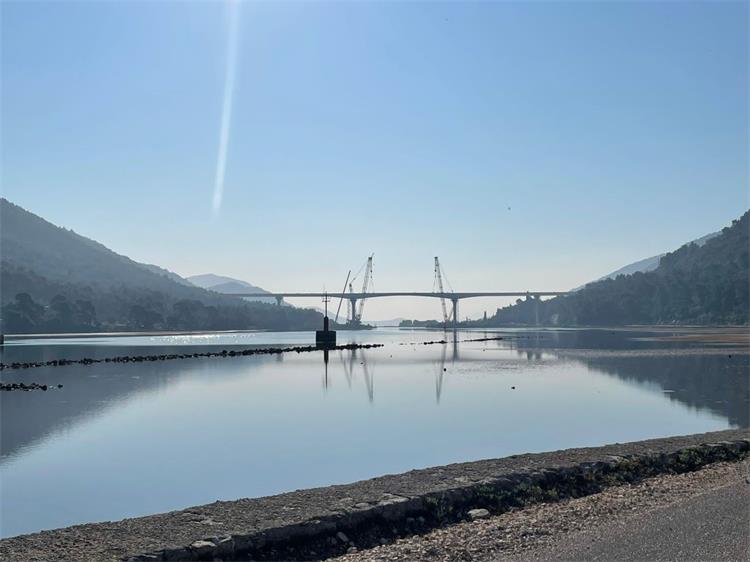 The final segment of the steel structure of the Ston bridge was assembled this morning, near the village of Broce on Pelješac peninsula. Completing the 485 metre structure, bridging Ston bay, was originally scheduled for Wednesday, 16 March, but the plans were foiled by high winds.

The structure of the bridge was executed in only six segments ranging from 60 to 85 metres in length, and weighing over 350 tonnes. The steel segments were produced in the summer of last year the facilities of Brodosplit, and transported to the construction site using a barge and tugboat.

In what constituted a delicate balancing act, impossible to perform with winds above 18 km/h, the segments were raised to the height of 40 metres prior to assembly. The final, central segment was raised into position using two cranes simultaneously. With the bridge structure in place, construction of the carriageway can now take place.

The span of Ston bridge connects the Polakovica and Supava tunnels, with 5 pillars and 2 abutments. Construction of this demanding structure on the route of a Pelješac Bridge access road, placed in the hands of Greek contractor AVAX, will put another puzzle piece in place for the project “Road connection to south Dalmatia.” The project, leaving more than one major bridge behind following its completion, is financed with the support of the European Regional Development Fund, as part of the Operational Programme Competitiveness and Cohesion 2014 – 2020.