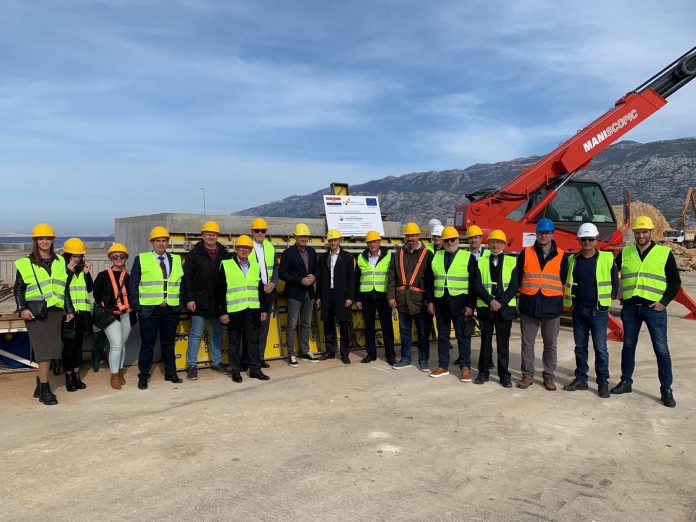 The leadership of the City of Novalja and Lika-Senj County spent their Monday morning touring the works on the Žigljen ferry dock and speaking at the project conference. The upgrade of the ferry dock should open the 'gates of Pag' wider, allowing 120-meter ships access.

A conference for the project “Reconstruction and upgrading of the Žigljen ferry dock” was held yesterday at the Olea hotel in Novalja. Most prominent among the attendees were Lika-Senj County prefect Ernest Petry, County Assembly President Marijan Kustić, director of Port Authority Novalja Igor Vidas, and mayor of Novalja Ivan Dabo. The conference was preceded by a tour of the works in the port, where the advanced stages of construction are proceeding smoothly.

The value of the project is €9.8 million, and most of the funding is provided with a €8.3 million Cohesion Fund Grant. Port Authority Novalja is the lead project authority. The conference confirmed that expectations were running high, in step with the value of the investment. Increasing the quality of life, checking population decline and promoting the development of the island of Pag are the project’s guiding ideas.

“The implementation of the project will ensure adequate mooring, higher capacity and level of service in the port. It will also decrease vehicle boarding waiting time. Additionally, the queues at the port will be reduced. Taken together, this will help improve the island’s connection with the mainland and the survival and development of the town of Novalja and the island of Pag in general,” said director Igor Vidas, highlighting the project’s many benefits.

The transformation of the Žigljen ferry port includes the extension of three mooring shores, making it possible to accommodate 120 meter vessels, and the construction of protective embankments, enabling mooring in bad weather.

According to the mayor of Novalja Ivan Dabo, the port of Žigljen is the “gate” to the island of Pag which makes investing in its infrastructure extremely important. As evidence in support of his claim, he cited the role of the port in establishing a supply corridor in wartime conditions of the 1990s.