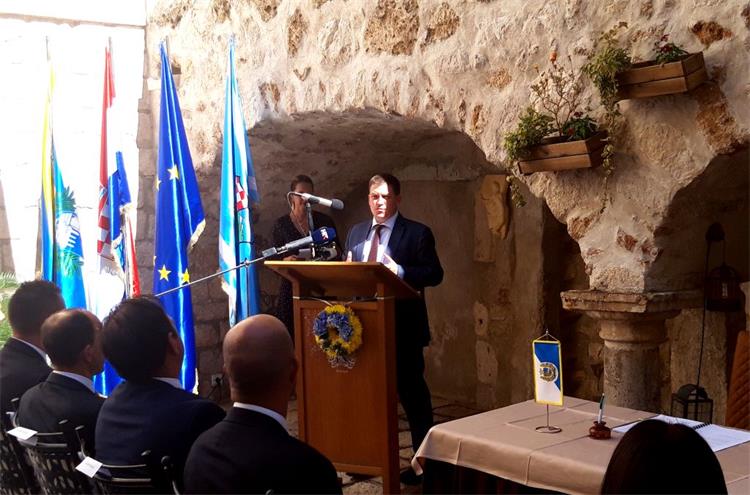 A Contract was signed providing over €2.5 million as a non-refundable grant to the Port Authority Senj for the purpose of constructing a new ferry slip in the port of Stinica. The port of Stinica is the most important maritime port connecting the island of Rab with the mainland, and the construction of the new slip will increase the number of completed voyages on the line 337 Mišnjak-Stinica.

A Grant Contract was signed in Rab yesterday, providing a grant of over €2.5 million to the Port Authority of Senj for the purpose of constructing a new ferry slip in the port of Stinica. The new slip, positioned to protect the vessels at berth from gusts of bora winds, will improve the accessibilit of the port and more secure entry and casting-off for ships outside of the peak tourist season.

The port of Stinica is the most important maritime port connecting the island of Rab with the mainland, the port of call for the state ferry line 337 Mišnjak-Stinica. Therefore the project in Stinica is highly significant for the inhabitants of Rab, as well as the Senj area. As the ferry line in autumn and winter months is most commonly used by the clients of Rab Psychiatric Hospital and Rab Health Centre, is it of particular importance to vulnerable social groups. The end goal of the project is reducing congestion in the port and enabling uninterrupted transport between the island of Rab and the mainland.

The signatories of the contract, financed within the Operational Programme “Competitiveness and Cohesion 2014-2020”, are the Minister of the Sea, Transport and Infrastructure Oleg Butković, director of the Central Finance and Contracting Agency Tomislav Petric and director of the Port Authority Senj Predrag Dešić.

Those knowledgeable about the project expect that the construction of the new slip will enable an increase in the number of completed voyages on line 337 by at least 50 per year, particularly in the period between October and March, when sailing is most affected by unfavourable weather conditions. The ferry servicing the route from the upgraded port of Stinica and the ferry port Mišnjak will be »Četiri zvonika«, launched in Kraljevica in 2017, the pride of operator Rapska plovidba’s fleet.

Minister Butković and CFCA director Petric used the visit to Rab for the signing of another contract, besides the one dedicated to the port of Stinica, the contract to finance the reconstruction and rehabilitation of the coast in the port of Rab. The minister clarified the reasons for granting support to both projects in his address. “The project in Stinica was in preparation for a long time and with its completion the manoeuvring of ferries will be made much easier, and the project in the city of Rab will alter the view of the town and contribute to the development of tourism“, declared minister Butković.

The total value of the projects in the ports of Rab and Stinica, guaranteeing secure ship connections for the island of Rab, is approximately €7,5 million.